The facility for carbothermal synthesis (CTSF) of mixed nitride uranium-plutonium fuel is part of the fuel fabrication/re-fabrication plant of the pilot demonstration energy complex (PDEC) being established at Siberian Chemical Combine (SCC).

The development was done under the PRORYV project led by Rosatom State Corporation. The CTSF components were fabricated at production facilities of Sosny R&D Company, Dimitrovgrad and GKMP R&P Company, Bryansk. The final assembling of the equipment and factory tests using mockup samples were conducted on a special test bench at GKMP.

Carbothermal synthesis of nitride fuel is based on recovery of uranium and plutonium dioxides by carbon in nitrogen flow.  The CTSF equipment includes six horizontal-type high-temperature batch furnaces for carbothermal synthesis of uranium and plutonium nitrides and six cooling chambers for removal of ready-made products without cooling down the furnace. The furnaces incorporate retorts to ensure tightness of the reaction zone during synthesis. A boat transfer system interconnects tight boxes, airlocks and the furnaces.

Oxygenated uranium and plutonium dioxide disks are placed in the boats. This is done through the inlet box. The same box is used to install the boats on special transfer trays. The box is filled up with nitrogen low in oxygen and water vapor. The airlocks are designed to replace nitrogen by argon. They are tightly connected to the inlet and the transfer boxes through tight slide gates. The design of the slide gates ensures smooth transfer of the tray with the boat through the transfer system that delivers the boats to the furnace boxes. The boxes adjacent to the furnaces incorporate boat lifts to install the boats with the discs in the furnaces. The furnace slide gates separate the gas medium in the boxes from that in the furnace. Thus, the boats come in the furnace for synthesis of nitrides.

The design of the retort ensures tight contact of the purged process gas with the product in the boats. A gas venting system evacuates gaseous products of carbothermal synthesis. Upon completion of the nitride synthesis, the boats are sent to cooling chambers that shorten the working cycle of the furnaces and increase their performance due to partial cooling, thus allowing removal of the boats with heat-treated discs from the furnace. The cooling chamber has an air-tight water-cooled body that joins the slide gates tightly. The internal atmosphere in the cooling chambers is argon low in oxygen and moisture. Once cooled down, the boats with the final product, i.e. uranium and plutonium nitride discs, are carried by the transfer system to the outlet box through the outlet airlock.

Three gases, i.e. nitrogen, argon, and a nitrogen-hydrogen mixture, can be supplied to the reaction space of the retort through the gas-supply system. Mass-flow controllers are operated by automatic control to switch over the gas supply and monitor the gas flow. A peculiarity of the furnaces for carbothermal synthesis of nitrides is the fact that heating and holding of the discs are performed first  in the nitrogen media and then in the nitrogen-hydrogen mixture (to remove excessive carbon), whereupon argon substitutes the gas mixture prior to cooling to prevent generation of sesquinitrides. Argon is purged to the furnace continuously.

Relief gas purifying units are installed in individual boxes above each furnace to minimize the length of the furnace-to-box pipe, facilitate cleaning of the pipes from the aerosol depositions, and downsize the occupied floor space. The gas purifying equipment incorporates cold traps, filters, shut-off and control valves,  a vacuum pumps, and instrumentation.

At the development phase, Sosny R&D Company performed safety assessments of the equipment for carbothermal synthesis of uranium and plutonium nitrides. In particular, a structural analysis for different loads was carried out, thermal and hydraulic parameters were calculated, and nuclear and radiation safety of the facility was justified. Preliminary tests demonstrated good agreement of thermal analysis and experimental data. The calculation results prove the carbothermal synthesis facility to meet nuclear regulatory requirements and technical specifications. 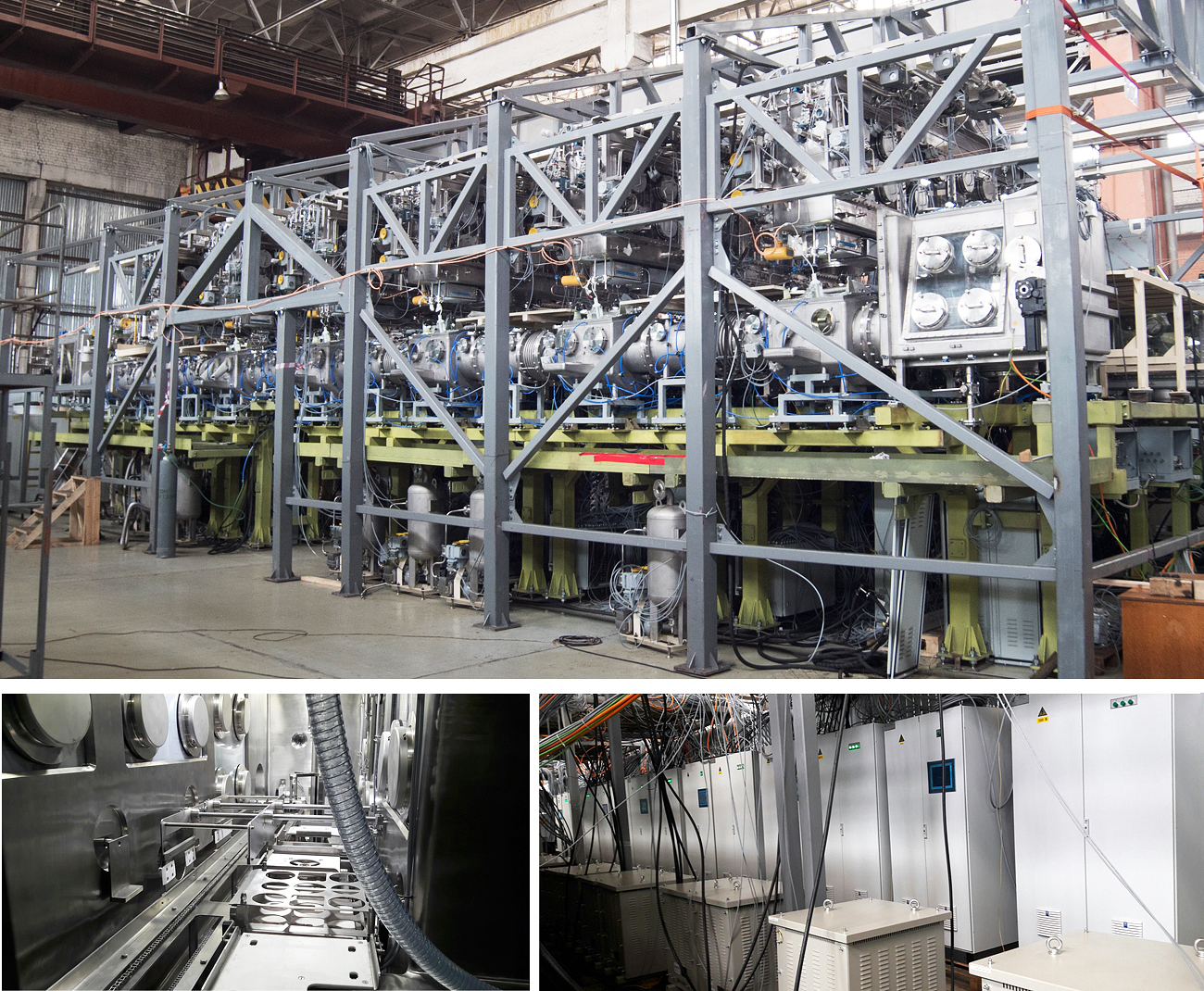