Development of Process Equipment for the Lepse Shelter

In the few last years, Sosny R&D Company has been taking an active part in implementation of the project on decommissioning the Floating Maintenance Base Lepse currently located at the Nerpa shipyard near Murmansk in northern Russia.

The Shelter facility was built at the Nerpa shipyard in order to create safe conditions to retrieve the spent nuclear fuel from the Lepse storage tanks.

In 2015‑2018 under the contract with the Kurchatov Institute, the specialists of Sosny R&D Company designed, fabricated, delivered and pre-commissioned the following process equipment and systems:

16T Trolley is intended to transport the Type KB-650B Cask filled with the spent nuclear fuel, the metal and reinforced concrete casks with solid radioactive waste, and the drums with the liquid radioactive waste from the Shelter. The configuration of the trolley depends on the object to be transported. The lower platform has some place for interim storing of the components which are not needed for the specific activities.

16T Trolley consists of two platforms arranged one above another. The trolley is power driven along the standard rail track. The electric motor has two speeds (high and low).

The power to the trolley is fed through a flexible cable connected to the power cabinet. The cable drum located on the trolley is used to wind up (out) the cable.

The trolley has two metal plates secured to its front and rear parts. Each plate functions as a position limit sensor which automatically stops the trolley whenever it comes in contact with an obstacle.

16T Trolley can be operated using either a fixed control panel or a pendant control station. The trolley travel logic depends on its current location, the actual position of the Shelter entry gates and the temperature of the trolley main components. The trolley is designed for operations at the ambient temperature below zero.

In case of the power failure the moving trolley can be controlled manually. The trolley has a coupler at its front (rear) part needed to attach the trolley to the truck for further towing if its electric motor fails. 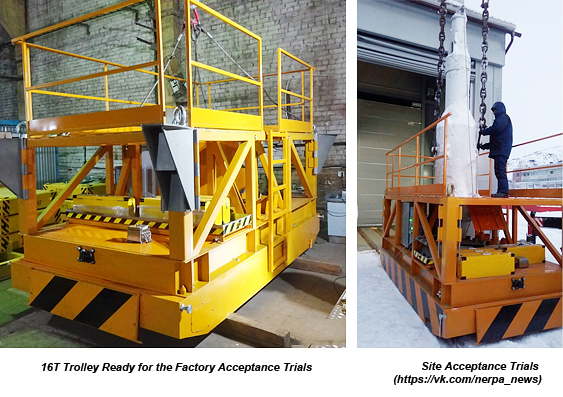 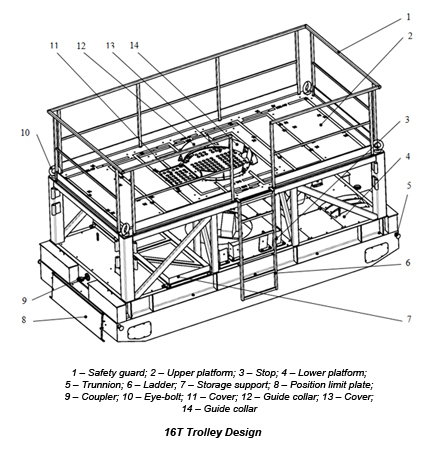 Knuckle Boom Crane is an auxiliary equipment for safe retrieval of the spent nuclear fuel from the Lepse Large Storage Package (LSP) in the Shelter. Its main component is the INMAN commercial loader crane.

The standard crane hook is replaced by a grapple designed by Sosny R&D Company for secure gripping and holding an object being handled. The force applied for moving the grapple up and down can be automatically controlled via interlocks. The design prevents inadvertent grapple opening in all cases, including the power loss. Moreover, the grapple jaws can be opened manually. A guide tube shall be attached to the grapple in order to align the grapple and the SNF retrieval equipment.

Knuckle Boom Crane is equipped with a support plate designed for secure fastening and uniform distribution of loads induced by the crane on the Lepse LSP. Also, this plate is intended to collect oil leaks caused by failed hydraulic system.

A hydraulic station creates and maintains necessary pressure of the operating fluid in the hydraulic system.

Knuckle Boom Crane has a remote-control system intended to perform the following functions:

To perform remote control of the process operations, a TV camera which is a component of Process CCTV System shall be mounted on the knuckle boom on a bracket. 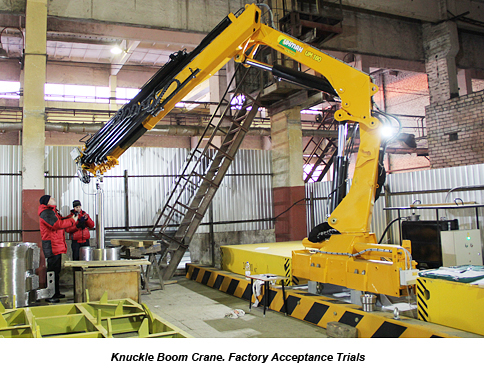 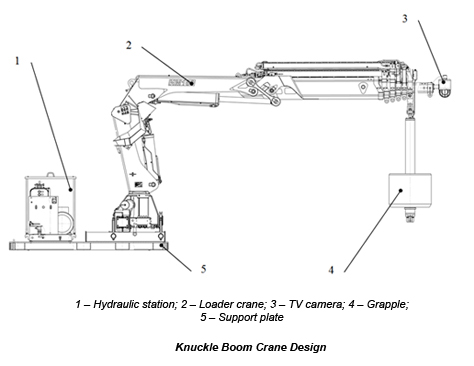 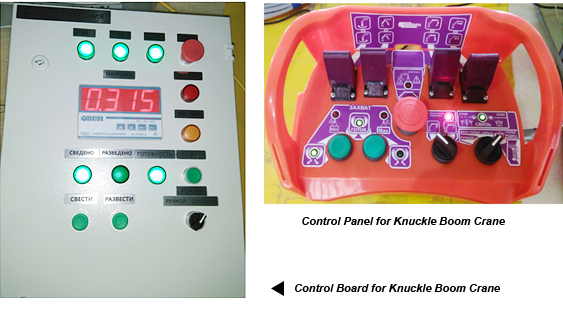 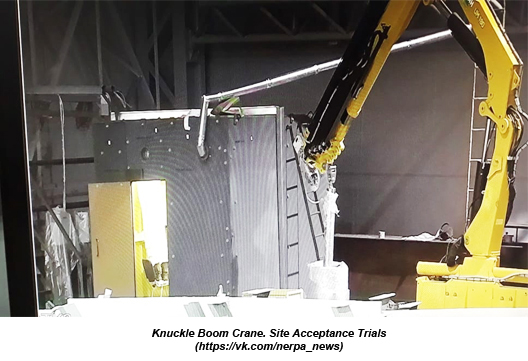 Criticality Alarm System is intended for criticality detection and evacuation signals during SNF unloading operations in the Lepse SNF storage tanks. This Criticality Alarm System is based on SRKS-01D Criticality Accident Alarm System made by DOZA Scientific&Production Company, Russia. The SRKS-01D system hardware has a certificate approving its compliance with standards and codes issued by the Department for Nuclear and Radiation Safety and the Organization of Licensing and Approval Activities, part of ROSATOM State Atomic Energy Corporation. 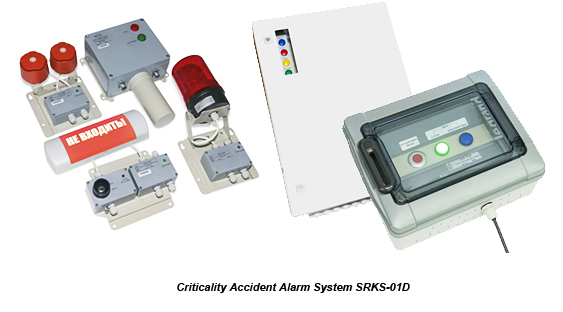 Each monitoring point has two backup criticality accident detecting units that are enclosed in lead shielded casings to minimize the background gamma radiation effect and the nuisance alarm probability. 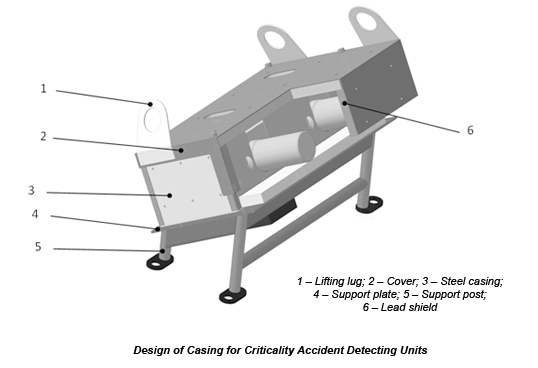 Process CCTV System is designed for visual monitoring of SNF retrieval process in the Lepse Shelter from the control room in the Sanitary Pass and the shielded room on the Lepse LSP.

This system has a distributed structure. It is intended to perform the following functions:

In process of aligning with a cell of the SNF storage tank, the TV cameras are used to monitor position of the guiding device rotating plate. These cameras are installed to replace position switches with the expired service life which have been removed before. A special lead shielded casing has been developed for shielding the TV camera from external gamma radiation. 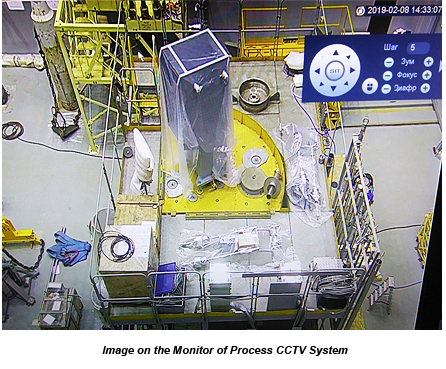 The operator can remotely change the system control mode, and the rotation speed and direction of each guiding device rotating plate. The emergency stop of the electric motors prevents any emergency. A special interlock prevents simultaneous rotation of two plates. 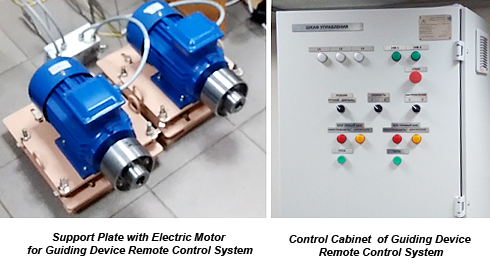 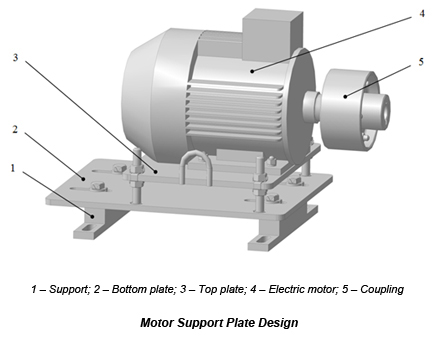 In late 2018 the Lepse LSP was placed inside the Shelter. In early 2019 under the contract with the FCNRS, all installation and pre-commissioning activities were successfully completed and followed by the site acceptance tests which confirmed the readiness of the equipment and systems for commissioning and operating within the project on SNF retrieval from the Lepse storage tanks. 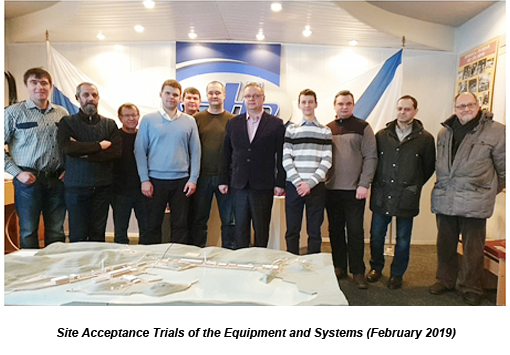