The Radiation and Technological Complex (RTC) was operated by JSC ‘Foton’, Republic of Uzbekistan, since 1975. It included some radiation-hazardous facilities, such as the IIN-3М reactor facility, two gamma-irradiation facilities (ISSLEDOVATEL and RKhM), the isotope storage facility, and the auxiliary systems and equipment. In order to increase level of the radiation safety of Tashkent city and the Republic of Uzbekistan and to reduce threat of the uncontrolled radioactive substances spread, in the year of 2012 the Cabinet of Ministers of Uzbekistan took a decision on the RTC decommissioning and requested the IAEA technical assistance in preparing the RTC Decommissioning Plan.

This Plan provided a review of the various decommissioning strategies. The prompt clearance of the RTC site to ensure unrestricted use of the area was selected as the best option. Thus the main tasks were to dismantle all buildings and facilities on the RTC site, to remove all radioactive waste and household waste from the RTC site and to reclaim the land for further use in the national economy.

The IIN-3M reactor was located in the laboratory building. The reactor was fueled with the water uranyl sulphate solution. The core charge was 22.4 L. The reactor was designed for research only, not for power generation. All spent nuclear fuel was discharged from the reactor and removed for reprocessing prior to the start of the decommissioning activities. When the spent fuel was removed, the maximum equivalent dose rate of gamma radiation on the external surface of the empty reactor vessel was 260×10-6 Sv/h.

The gamma-irradiation facilities (ISSLEDOVATEL and RKhM) were located in a separate building. All gamma radiation sources had been removed from the facilities for the disposal before the RTC decommissioning began.

The isotope storage facility was used to store solid radioactive waste accumulated over the period of the reactor operation. The maximum equivalent dose rate of gamma radiation from this solid waste was 30×10-6 Sv/h.

On request of the Cabinet of Ministers of Uzbekistan and with funding from international donors, the IAEA published a tender on works related to the RTC decommissioning. The international Consortium comprised of the Institute of Nuclear Physics of Academy of Science of the Republic of Uzbekistan and Sosny Research and Development Company, the Russian Federation became a successful tenderer. In August 2015 the Consortium launched the RTC Decommissioning Plan.

This stage was aimed at the establishment of the effective management mechanism to monitor the due dates and the cost of the activities related to the RTC decommissioning, and to ensure work quality as well. Deliverables prepared Management Arrangements Organogram, Work Breakdown Structure, Project programme Gantt chart, Quality Assurance Plan, and Site Emergency Plan. 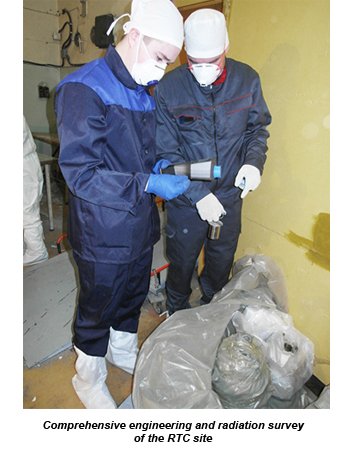 The CERS was aimed at determining the state of the structures, systems, elements of the RTC site, evaluating their contamination, characterizing and identifying the stocks of radioactive waste and other hazardous waste accumulated over the period of operation. The findings of the CERS demonstrated, that the reactor vessel, the equipment for discharging liquid spent fuel, the activated concrete in the reactor box, the gas suction and removal system of the reactor vessel and the remaining solid waste fragments in the isotope storage facility were the main sources that contributed to the gamma-radiation dose rate on the RTC site. During the CERS, the volume and category of solid and liquid radioactive waste were identified, the data on surface contamination were acquired and organized for all RTC buildings and facilities, the soil and groundwater radiation characteristics were studied; the technical condition of the buildings, equipment and systems was evaluated.

The detailed design of the engineering works documentation determined the specific activities and described the technology and the work procedure, the human, time and material resources needed as well as measures to ensure safe work implementation.

The prerequisite activities included creation and delivery of the RTC decommissioning equipment, that comprised:

As a result of the prerequisite activities, the SANOATGEOKONTEHNAZORAT, the state nuclear regulator of Uzbekistan, authorized the RTC decommissioning.

Stage 3. Removal of the reactor vessel and contaminated equipment, and the decontamination of the buildings and facilities on the RTC site

The radiation hazardous activities were carried out at the RTC site in the following sequence:

1) Dismantle the equipment for the discharge and interim storage of the uranyl sulphate solution.

2) Discharge cooling water from the equipment of the reactor vessel cooling system.

4) Dismantle and prepare the reactor vessel for shipment for final disposal.

7) Remove activated concrete from the reactor box walls in the laboratory building.

8) Remove surface contamination from the construction structures and equipment in the rooms used for handling activated concrete.

As the result of the completed work, all buildings, rooms and structures were decontaminated, and the radioactive material, equipment, building structures and all types of waste were removed from the RTC site.

The equivalent dose rate was monitored to control the radiation at work places. The individual monitoring was also performed. The values of the doses obtained were approximately two orders of magnitude less than the conservative estimates provided in the radiation safety analysis. Moreover, the Uzbekistan National Center for Sanitary and Epidemiological Supervision, which supervised the work safety, detected no breach of radiation and industrial safety.

Stage 4. The RTC site clearance, the demolition of the buildings and facilities on the RTC site, and the initial technical remediation of the area