In 2010, the absence of dry storage technology for non-conforming spent fuel from the RBMK-1000 reactor made Rosatom State Nuclear Energy Corporation initiate a series of work to analyze the safety of its reprocessing. Sosny experts collected and analyzed data on the quantity and characteristics of non-conforming RBMK-1000 spent fuel assemblies available in the storage pools of nuclear power plants, as well as capabilities of handling them at the NPPs and Mayak PA. The analysis demonstrated the potential of involving regenerated uranium from non-conforming RBMK-type SFAs in the nuclear fuel cycle.

In 2011, a pilot batch of leaky SNF was removed from Unit 2 of the Leningrad NPP. The pilot project explored the feasibility of reprocessing the RBMK spent fuel and confirmed the possibility in principle of its transportation and reprocessing.

The Sosny engineers designed irretrievable air-tight ampules for the fuel rod bundles and made modifications to the TUK-11 cask to transport the pilot batch. They also developed equipment for cutting the SFAs in a shielded cell, loading the ampules with the fuel rod bundles into the casks, and handling the casks containing the ampules at Mayak PA. The work was fully justified for all project phases. 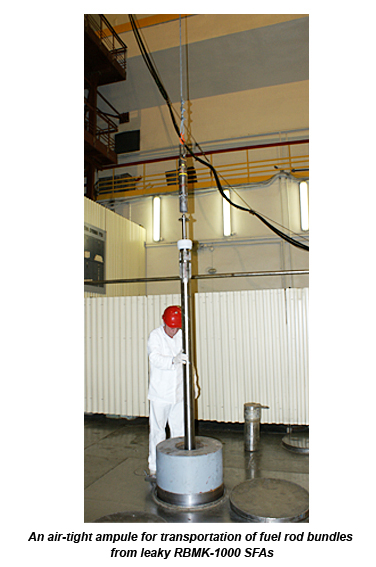 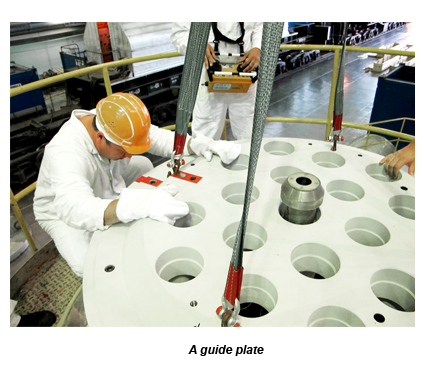 The leaky spent fuel was dried by leaving it in the shielded cell to drip at an increased temperature. The ampules with the fuel bundles were loaded into the shipping casks using a standard transfer cask and a specially designed guide plate.

The pilot project demonstrated the feasibility of encapsulating the fuel rod bundles in the shielded cell at the power plant, the safety of loading the ampules into the casks, and the feasibility of joint reprocessing of ampules and the fuel bundles. The issues associated with the explosion safety of temporary storage of the leaky RBMK SNF in air-tight ampules within a given period were successfully resolved.

In 2012, following the results of the pilot project Rosatom State Nuclear Energy Corporation decided on further shipments of non-conforming SFAs in TUK-109 to the reprocessing plant at Mayak PA. Sosny engineers developed insert components for the TUK-109 cask, i.e. a basket and ampules. The ventilated ampule for the non-conforming intact RBMK-1000 fuel bundles ensure the following:

The calculations demonstrated that a standard charge of ampules containing non-conforming intact RBMK-1000 SFAs does not generate an explosive hydrogen concentration during temporary storage and transportation in the TUK-109 cask within one year. 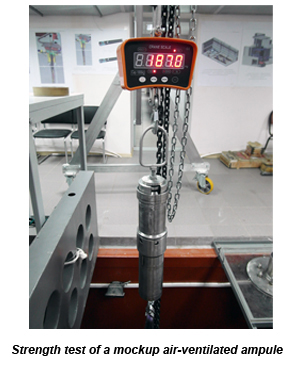