Elimination of Consequences of the Fuel Destruction at the Paks NPP 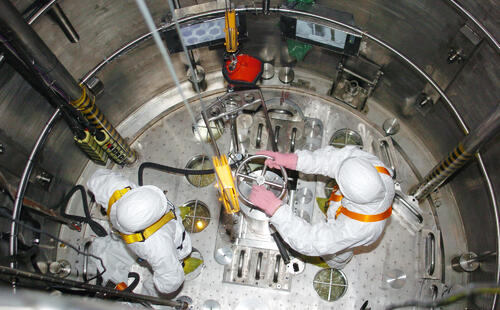 The Paks NPP lies in the heart of Hungary on the Danube River. Over the years of operation of Russian VVER-440 units, the Paks NPP has demonstrated the best performance and efficiency. However, the NPP personnel have had concerns about magnetite deposits on the fuel rod cladding in the last few years.

Later, an official incident investigation report stated that on April 10, 2003, in the process of a cleanup operation during scheduled maintenance of Unit 2, a few fuel assemblies were seriously damaged to cause a radioactive release that exceeded a regular one for an operating unit. Removal of the lid showed a significant radioactive release into the ventilation system, increased dose rate at the pool, and higher volumetric activity in the cooling pool water. The nuclear safety situation was unclear, too. Having opened the lid, the experts inspected the state of fuel assemblies and classified the event as Level 3 (an incident). This made Unit 2 reactor shut down.

On April 17, 2003, on behalf of the Paks NPP management CEO Istvan Kocsis addressed Russian TVEL Corporation for aid. In two hours after receiving the letter, the Russian side confirmed its readiness to participate in the international tender to eliminate the SFA damage consequences at the Paks NPP and started elaborating proposals.

The preliminary investigations showed almost all the SFAs to have failed to one extent or another. The middle of the tank represented a pile of fuel rod fragments and loose pellets that had spilled out of their claddings. The lower parts of the fuel assemblies had not suffered any damage.

On September 9, 2003, the TVEL Corporation and the Paks NPP signed an agreement. It stated that the Russian specialists would remove all the SFAs fragments from the tank, load them into specifically designed canisters for wet storage at the Paks NPP for five years, and then transport them to the reprocessing or dry storage facilities. That required immense research and development efforts from the Russian and Hungarian counterparts. 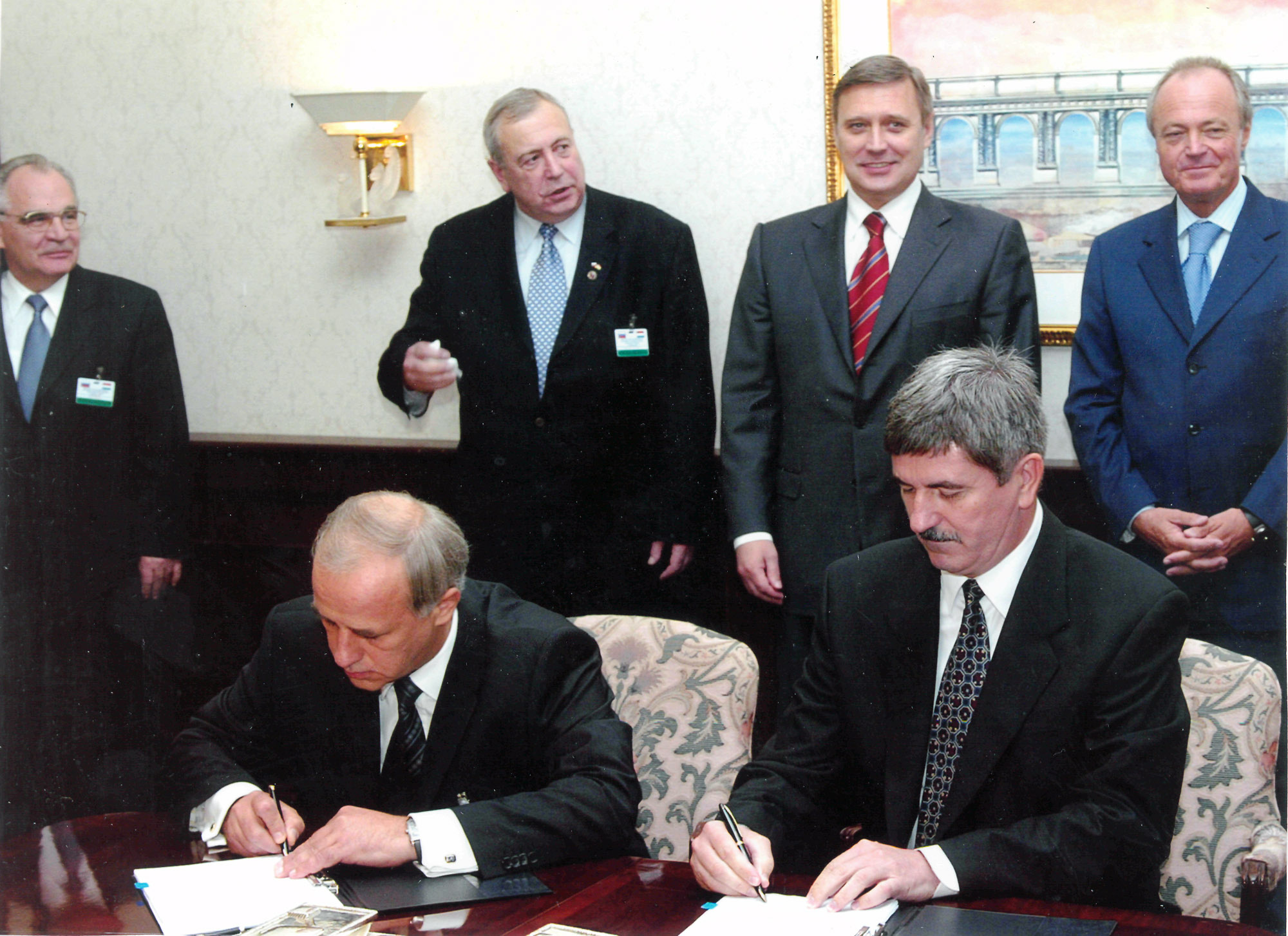 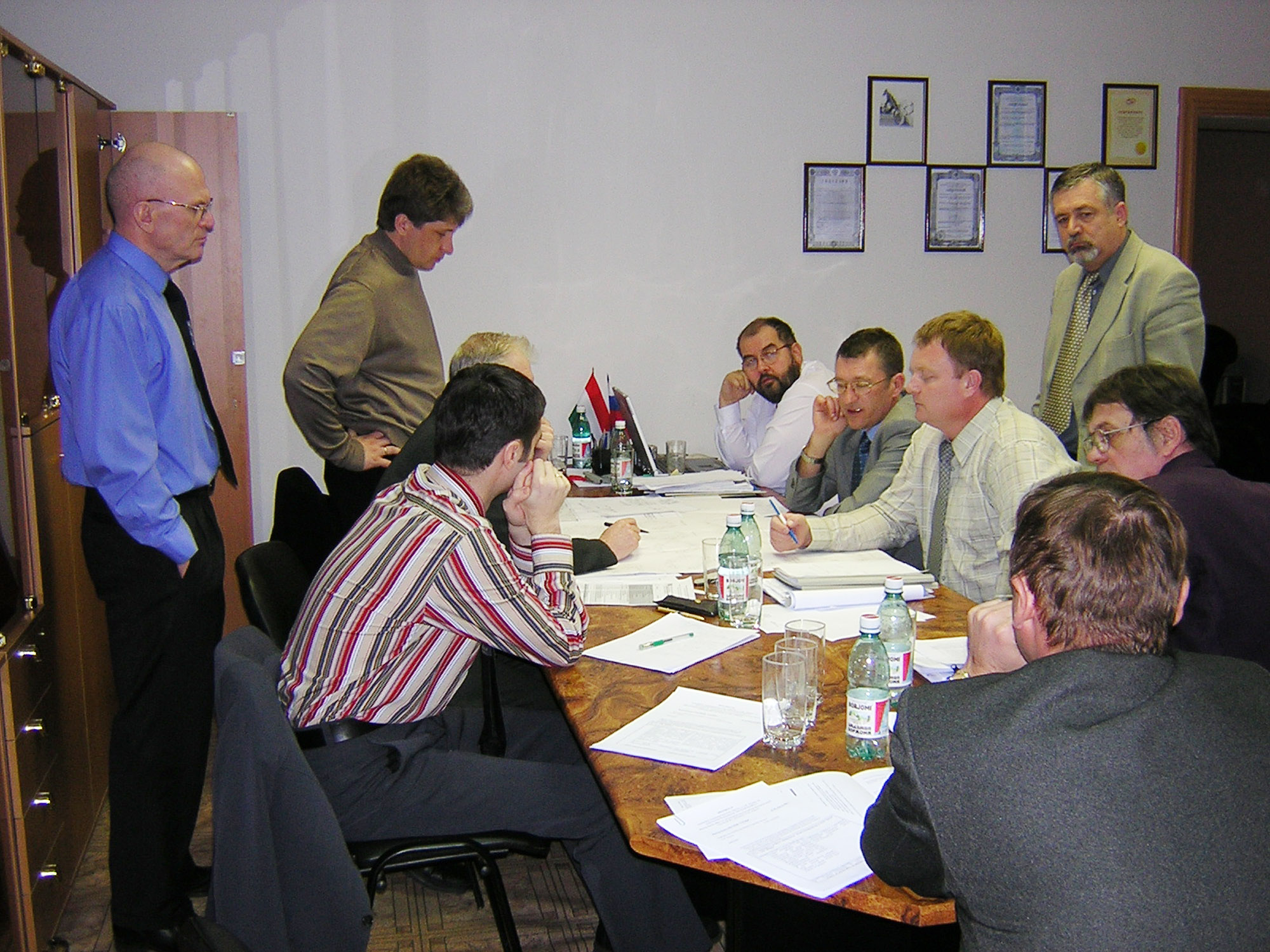 The Sosny R&D Company developed the draft and final designs of a frame, canisters, equipment and tools. To try out the technology and to train the personnel, Sosny specialists fabricated, mounted and tested the working frame, all the required equipment and tools on the SSC RIAR site. 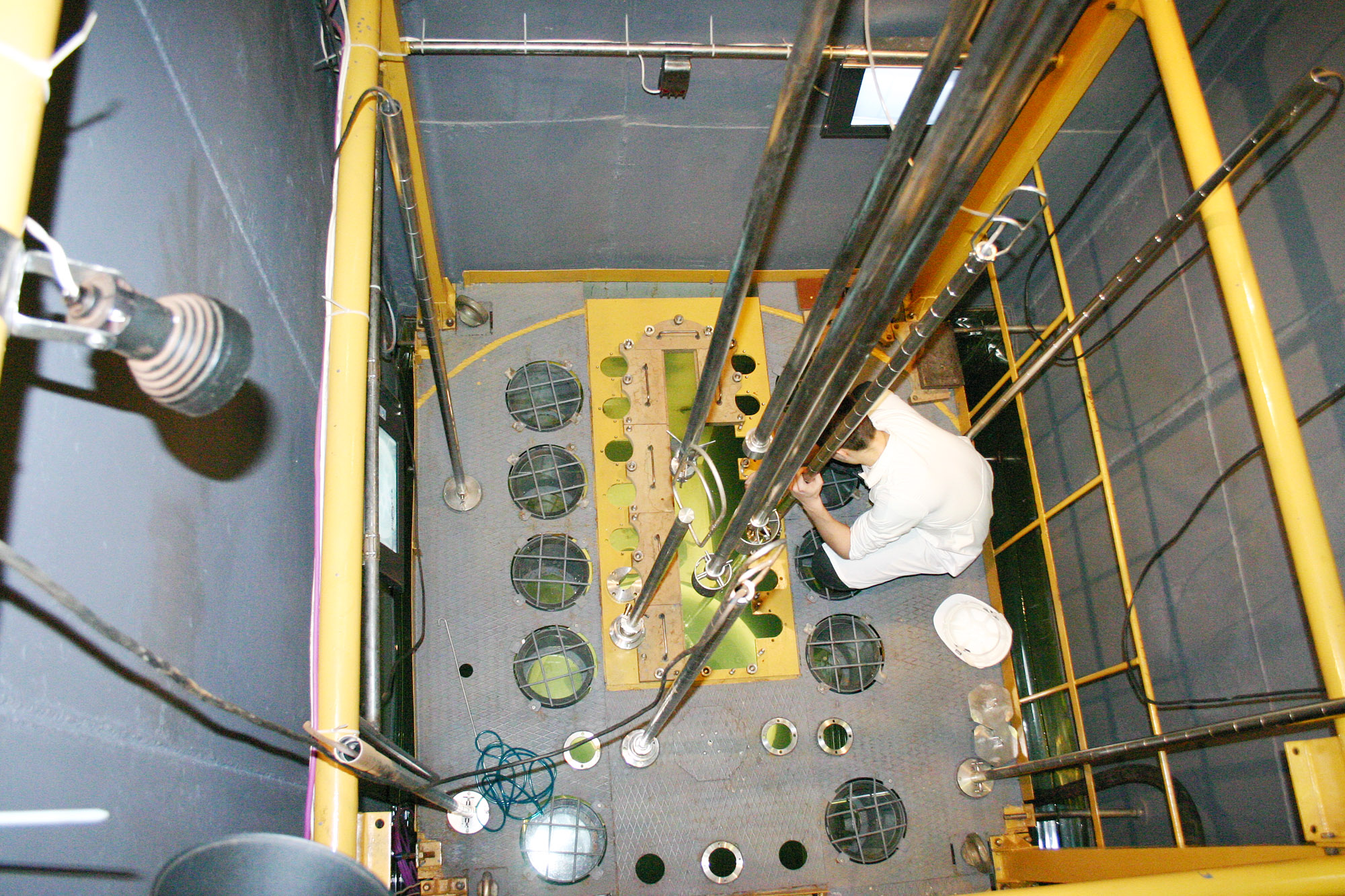 The set of equipment and tools included more than 100 types. Among them were grapples for handling SFA fragments of different shape, SNF canisters, and SRW containers; manipulators with replaceable attachments; a grab with a bucket for fuel rod debris; cutters for spacer plates in the tank, cutters for separation of end pieces from intact and failed SFAs, and many others. The analysis performed by joint efforts of the Sosny R&D Company, the Kurchatov Institute, and the VNIPIET demonstrated the safety of the selected technology. 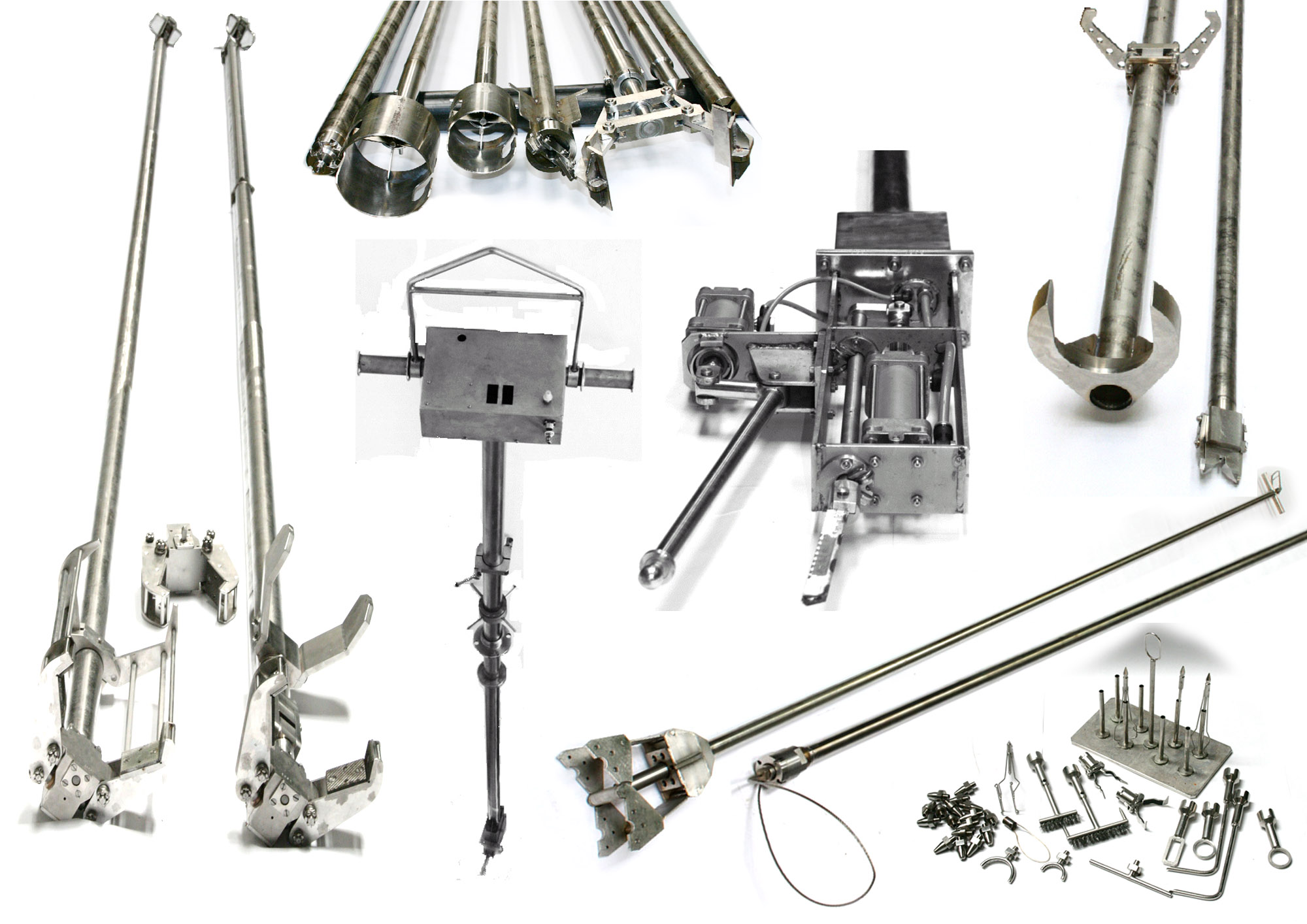 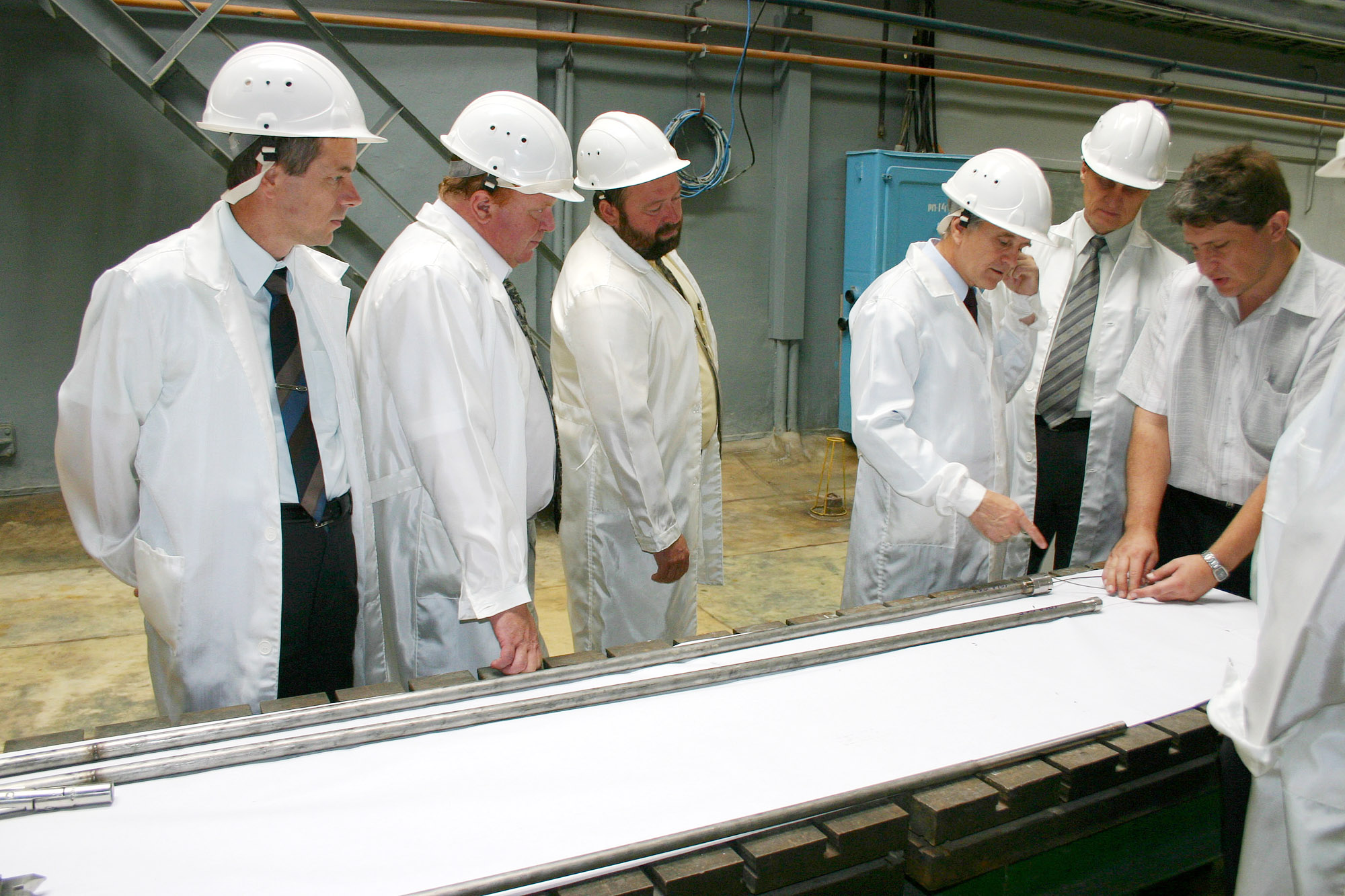 The most complicated and cumbersome part of the technology was a working frame designed by the OKB Gidropress. The working frame and the large-size equipment were fabricated and tested at the Ozersk Plant of Nonstandard Equipment.

Two types of  ventilated water-filled canisters were developed to accommodate damaged SNF. The cooling pool water entered the inner cavity of the canisters through a special pressurizer of a patented design (RF patent 135838). The pressurizer served to remove radiolytic gases from the canister. It also prevented the dissolved radionuclides from release into the cooling pool water. The canisters were fabricated and tested at the Elektrostal Machine-Building Plant.

The tank clear-out operations started on October 1, 2006, after the Hungarian regulatory authority issued a permit. Trained Russian specialists worked 24 hours a day in four shifts. Three operators were stationed on the working frame at 3 m above the tank's upper flange and removed SFA fragments from the tank with long-length tools. The entire process was continuously surveyed and recorded by TV cameras.

The SFA fragments, fuel rod debris, and loose spent fuel were loaded into canisters. The heads and tails were separated from the fuel columns and put into a solid radioactive waste (SRW) vessel. In the process, the spent fuel was thoroughly accounted by weighing before being loaded into the canisters.

A major complication was a huge spacer plate with the SFAs swollen after a heat stroke and sitting tightly in the spacer plate. This plate had to be cut into several fragments and removed from the tank. For the final cleanout operation, the lower heavy plate had to be drilled through by a specially designed pneumatic crown driller.

That implied the following activities:

Using an automatic grab and manipulators, they cleared out a pile of the fuel rod fragments in the middle of the tank.

Then, they succeeded in taking out the fragments of the upper plate and the SFAs under it. Thus, the operators gained access to the SFA lower parts. They used a grapple to install them in a cutter to separate the tails and the fuel column.

The operators removed the loose spent fuel and the SFA debris from the lower plate of the cleanup tank in the same way as from the upper plate.

Having cleared the required space, they drilled a through-hole in the central part of the lower plate.

Having collected the bulk spent fuel from under the lower plate, the operators removed the remaining fuel debris and resumed collecting the bulk spent fuel. As a result, an insignificant amount of spent fuel remained at the tank bottom to remove by a suction system later.

The practical activities to eliminate the incident consequences in Unit 2 concluded with signing an acceptance report on March 30, 2007.

In the process of the operations, radiation monitoring of the personnel was performed in full compliance with Russian and Hungarian norms and regulations. The maximum individual dose over the entire campaign did not exceed 10% of the annual dose limit, and the average one made up 5 %. 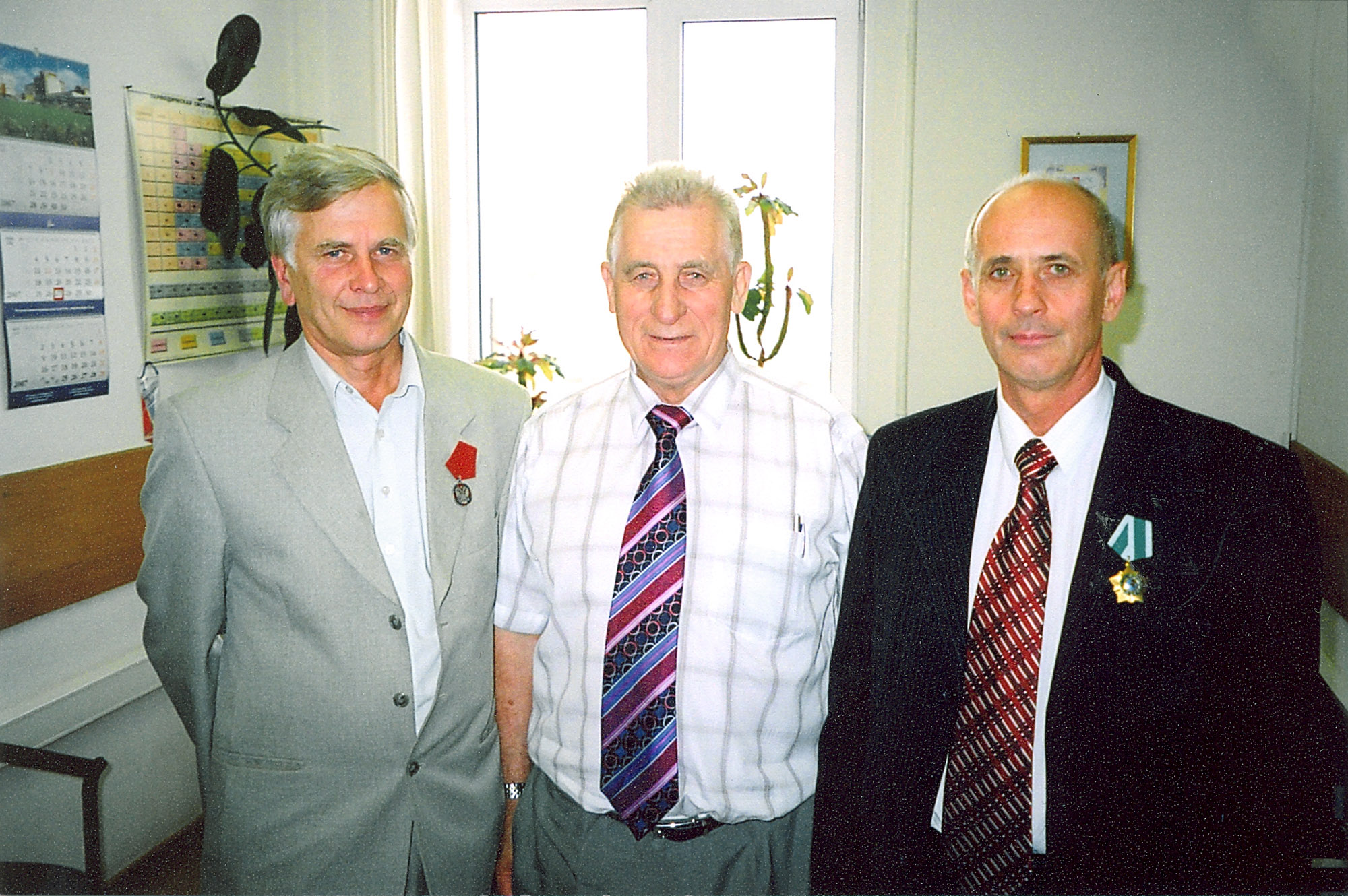 The work was completed in full scale as scheduled and at a high technological level. As a result, more than 5 tons of SNF were removed from the tank. On December 29, 2006, at 13:07 Unit 2 of the Paks NPP was brought to the minimum controllable power, and, on January 1, 2007, it was put to the rated power.

Drying was the next stage of preparation of the spent fuel for shipping. Simulations of the SNF storage in an air-tight canister were performed in shielded cells at SSC RIAR to investigate the behavior of the destructed fuel and determine the remaining moisture in the canister that would allow safe SNF handling throughout the campaign. It yielded experimental data for justification of safe transportation modes for the spent nuclear fuel.

Thermal vacuum drying of the SNF with no water pre-draining was decided upon to minimize the personnel exposure, the amount of radioactive waste generated, and the work time.

The analysis demonstrated nuclear and radiation safety of the proposed technology.

The working platform that had been used to dry the SNF was upgraded to be employed during  removal of the damaged fuel from the cleanup tank. 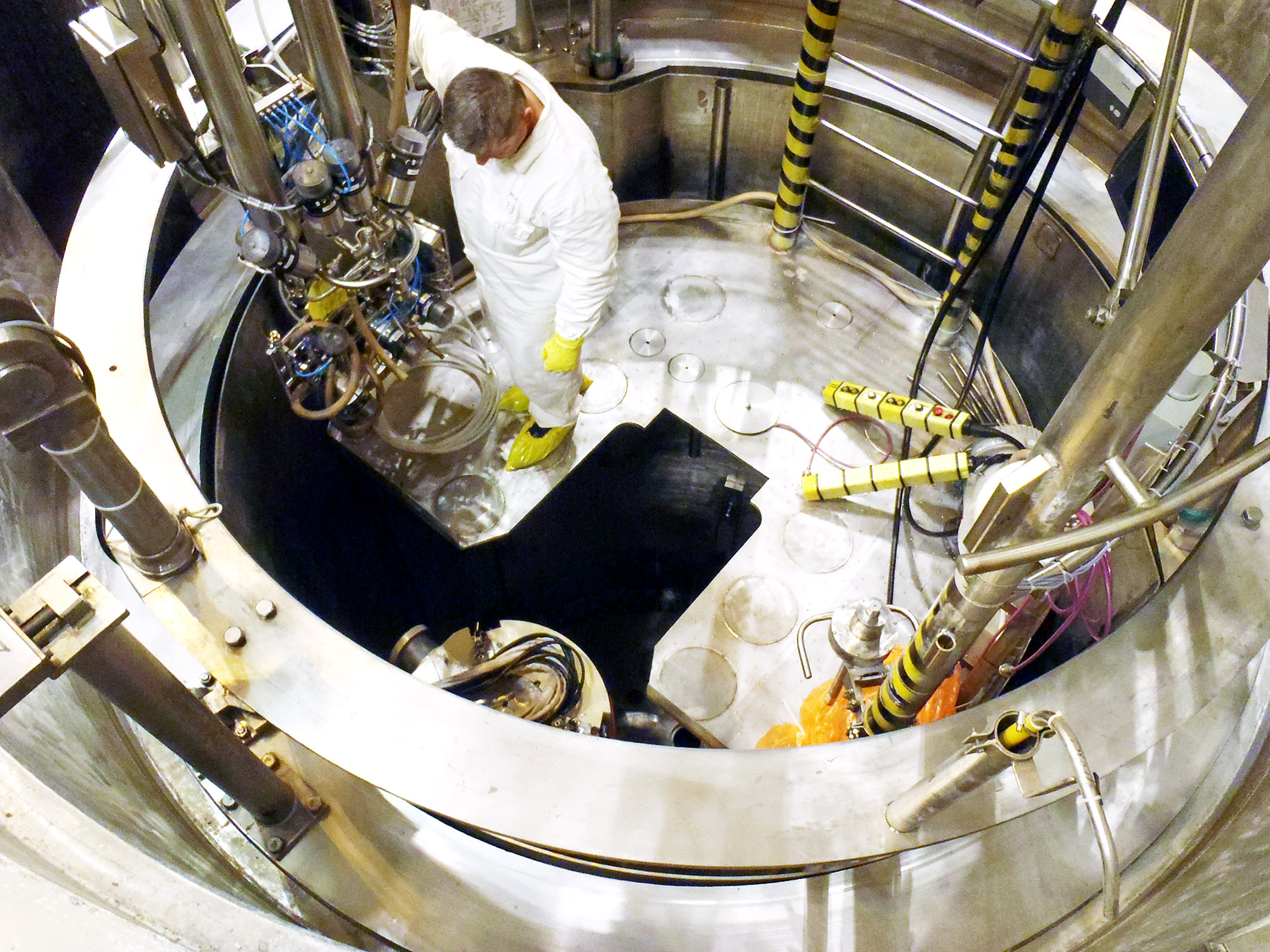 Specialized equipment was developed for drying the SNF canisters, i.e.

A shielding cask ensured protection from ionizing radiation during SNF-containing canister drying and tightening operations. The electric heaters inside the heating module heated up the canister body. A dedicated heating module was designed for each type of the canisters. 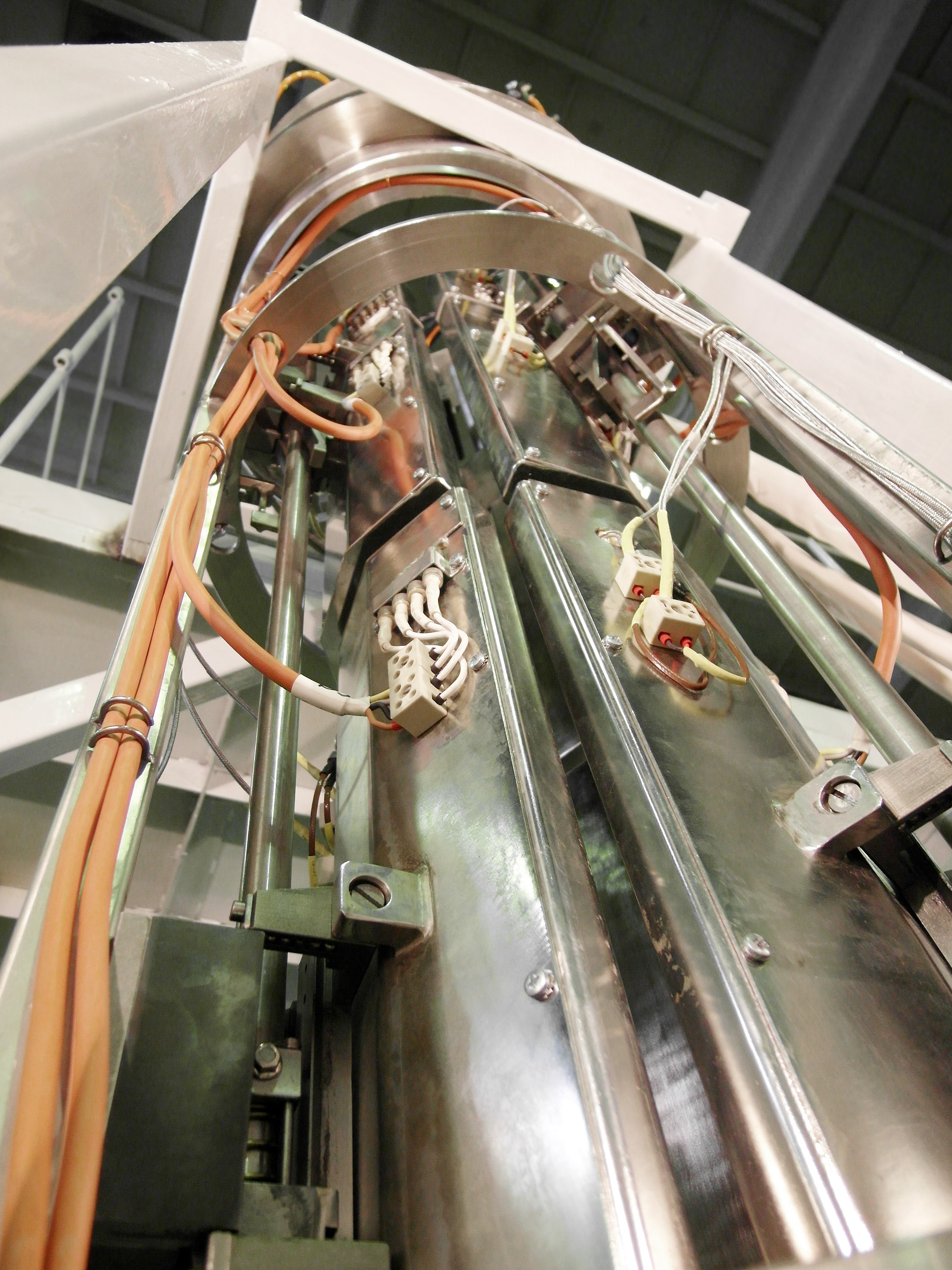 A steam-gas mixture came from the SNF canister to the condenser unit through the filtering and compensation unit. The filter stack in the filtering and compensation unit captured radioactive aerosols and SNF particles continuously carried away by gas stream from the canister during drying operations. Aerosols are volatile fission products (137Cs and 134Cs) and activation products (60Со). The retention rate for the steam-gas mixture was 99.999 % related to the spent fuel particles larger than 0.01 μm; the one related to cesium-137 was 99.95 % and cobalt-60 – 94 %.

Once dried, the canisters were filled up with inert gas, all joints and gaps were tested for leakage, namely, the bottom drain valve, the canister lid valve, and the lid-to-body joint. The leak tests by an ASM142 helium leak detector showed that the total leakage from all dry SNF canisters did not exceed 6.7х10-7 Pa·m3/s.

The main operations for preparing the canisters with the damaged SNF for transportation were as follows:

1) Dismantle the pressurizers from the canisters in the cooling pool.

2) Transfer the canisters from the cooling pool to the well for replacing the lids, drying and tightening.

5) Transfer dry canisters from the well to the cooling pool.

6) Interim storage of the canisters in the cooling pool with leak tests regularly performed.

7) Leak tests of the SNF canisters prior to loading into shipping casks.

8) Load the canisters into the shipping casks and prepare the packages for transportation. 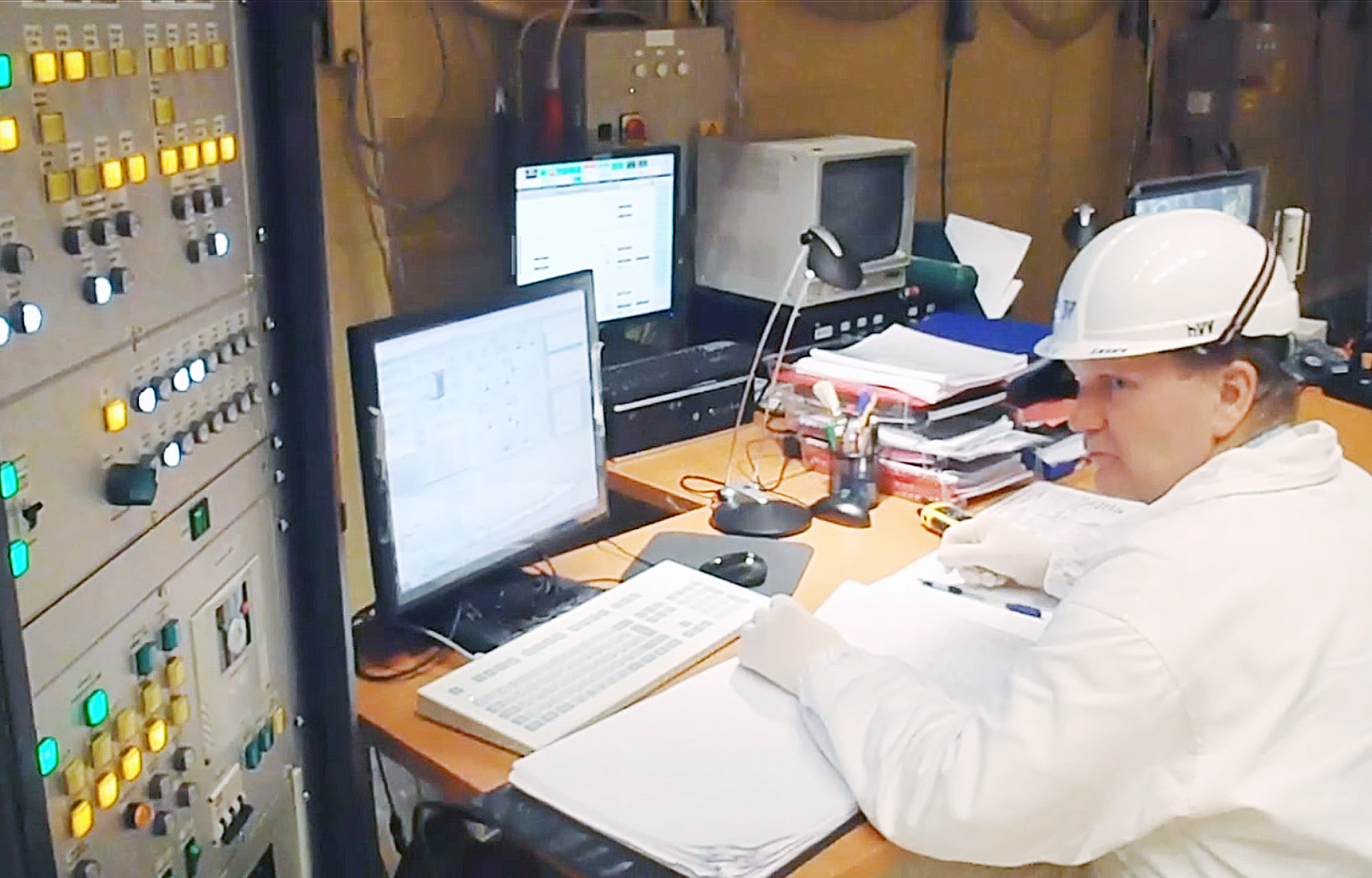 In 2013, hands-on operations to prepare the SNF canisters for transportation were successfully completed at the Paks NPP. The Sosny staff performed the activities under the direction of the Paks NPP personnel following the procedure approved by the Hungarian regulator. During the activities, no failures occurred affecting the overall rate of the fuel preparation campaign. In 2014, the SNF canisters were shipped to Mayak PA for reprocessing.

The main outcome of the joint Hungary/Russia Paks Project is that the threat of a nuclear and radiation hazard was eliminated and the nuclear fuel was put in safe controllable conditions due to the activities performed.  The data obtained from the operations give a chance to see the nuclear fuel behavior under severe accident conditions in a new light.