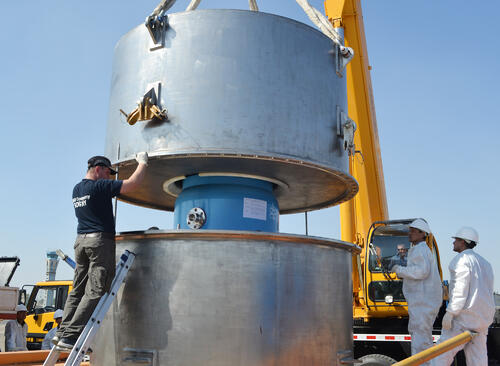 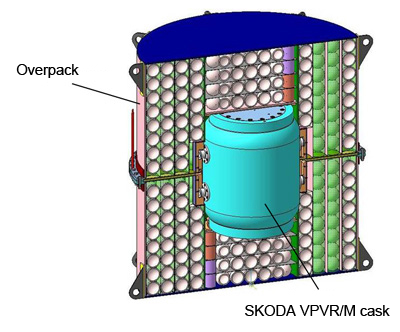 Type C packaging is an overpack for transportation of radioactive material without any activity limits by any conveyance including aircraft. The Type C package must maintain its containment upon impact onto a target at a velocity of 90 m/s (this is similar to a fall from a height of 450 m).

The work was done under the U.S./Russia RRRFR program under Order of the U.S. Department of Energy and was aimed to enhance the safety of air shipments of radioactive material. It is the world’s first Type C package for the transport of research reactor SNF by air.

The Sosny engineers designed the overpack jointly with the RFNC-VNIIEF experts. In 2009–2010, an analysis considered different overpack layouts and structural materials. Many options were comprehensively studied and computed to select the optimum design - a vertical cylinder with double walls backfilled with hollow balls. The cylinder consists of two parts with a flanged joint in the middle and accommodates a SKODA VPVR/M cask. The base material is the OT4 titanium alloy to the national standard GOST 19807-91.

By mid-2010, the concept design had been finished and the package was assigned the identification number TUK-145/C. In April 2011, the preliminary design was agreed on with carriers and a certification test enterprise. Simulation-predicted accidents during transportation of the spent fuel in TUK-145/C were considered following regulatory requirements.

In May 2011, a TUK-145/C mockup package (a 1:2.5 scale) was successfully tested on the rocket sled at VNIIEF for impact onto a target at a velocity of more than 90 m/s. Thereafter, a Certificate of Approval for TUK-145/C Package Design was granted. 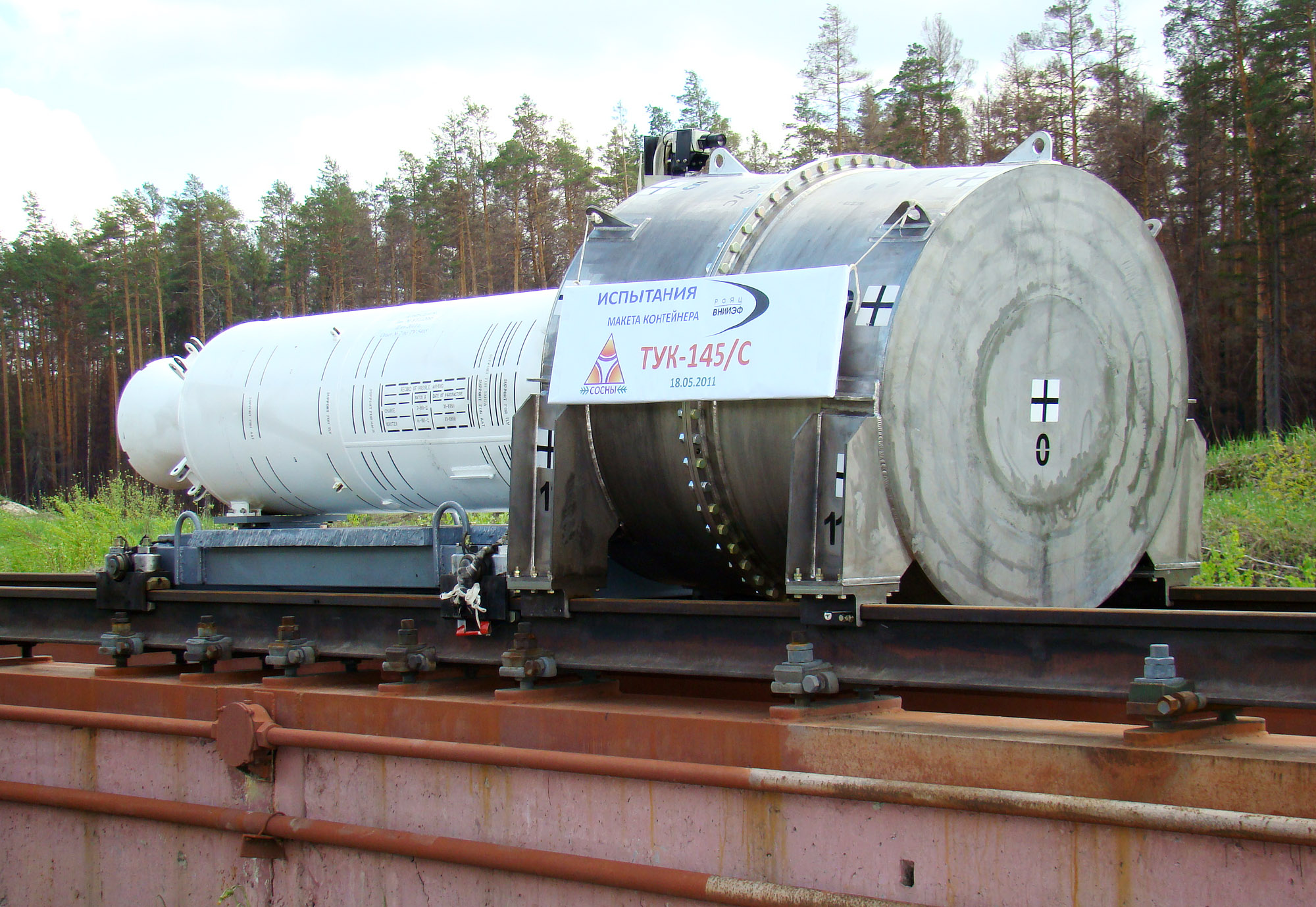 Specifications of the TUK-145/C package:

The Sosny experts developed different transport plans for different options to handle the TUK-145/C package. Option 1 requires a good road infrastructure on the way from the consignor's site to the airport. The SKODA VPVR/M cask containing the spent fuel is loaded into the overpack on the consignor's site and transported to the airport on a semi-trailer. An AN-124-100 aircraft can accommodate two semi-trailers with TUK-145/C packages. Three SNF shipments were completed this way: one from the Hungarian research reactor (2013) under the RRRFR program and the other two from Ghana (2017) and Nigeria (2018) under the MNSR Conversion Program. The way of transportation of the TUK‑145/C package by road and air requires a single certificate. 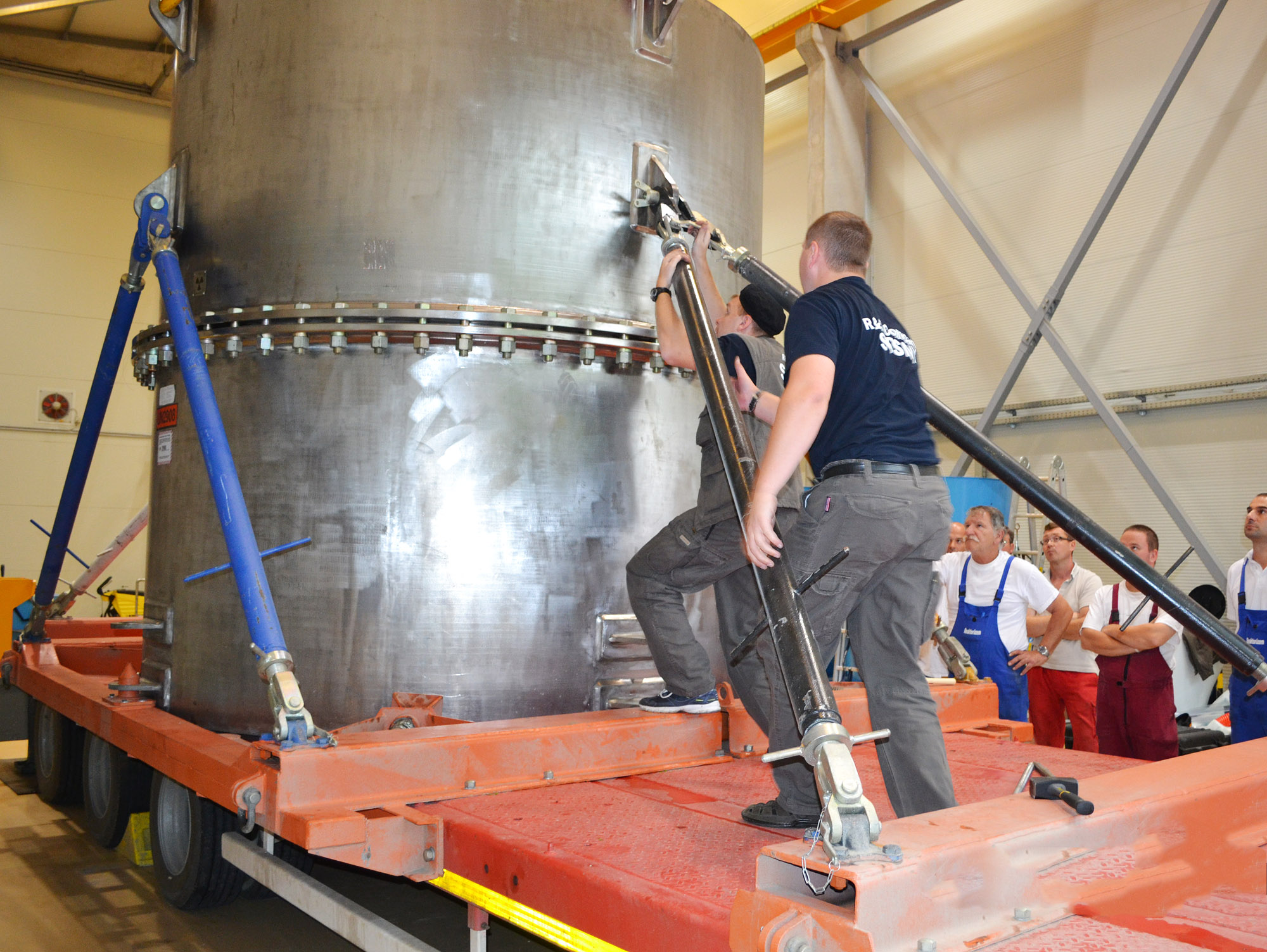 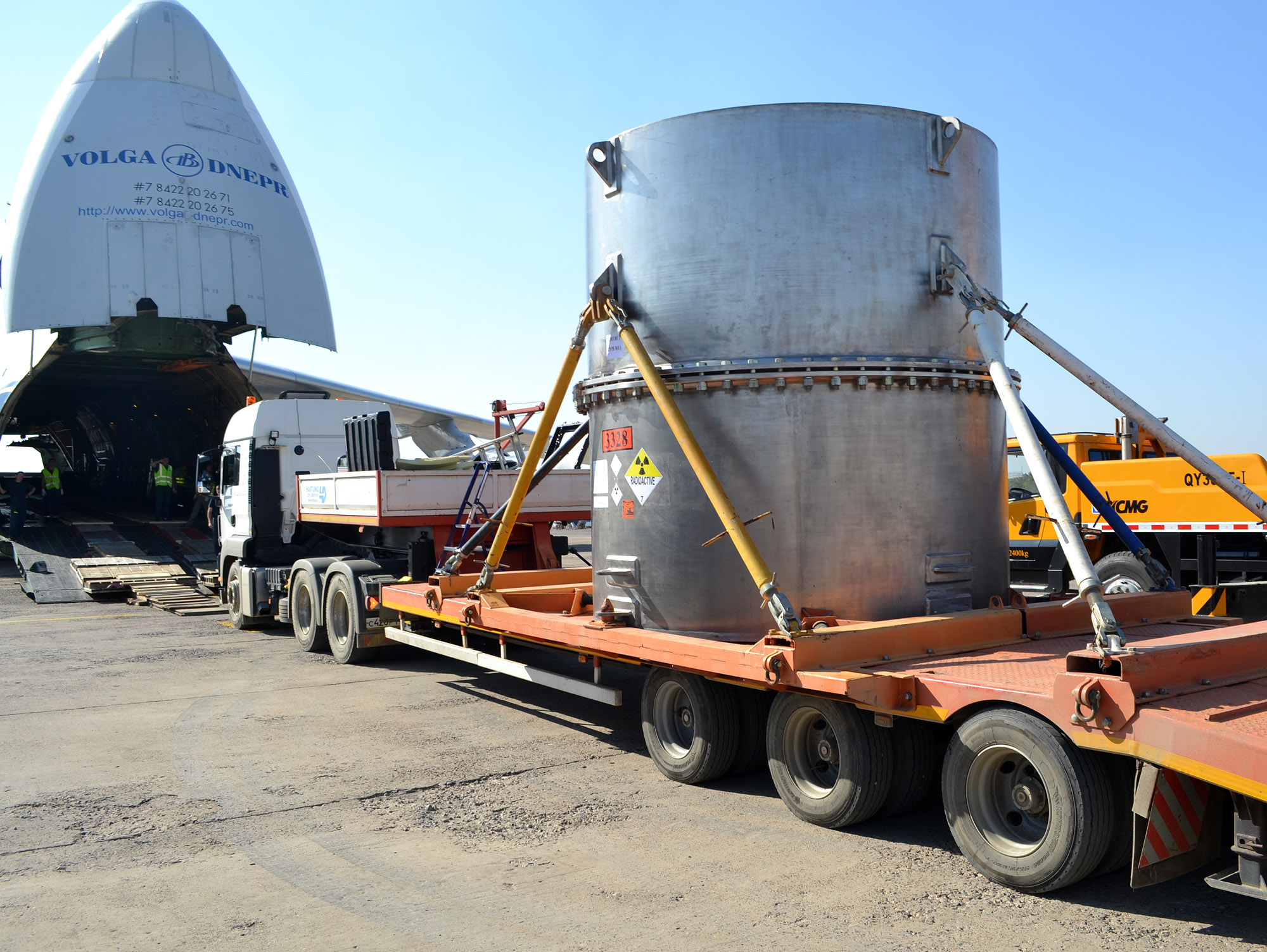 Option 2 involves transporting the SKODA VPVR/M cask in an ISO container to the airport by road, where it is installed in the pre-positioned overpack. The cargo is moved into the AN-124-100 aircraft over a roller track. This option was used for the RRRFR shipment of the spent fuel from Vietnam in 2013. Making up the package on a semi-trailer and moving it into the aircraft is a possibility, as was done for the removal of the liquid RR SNF from Uzbekistan in 2015. This option requires two certificates of approval – for road shipment of the SKODA VPVR/M cask (a Type B package) and air shipment of TUK-145/C (a Type C package). 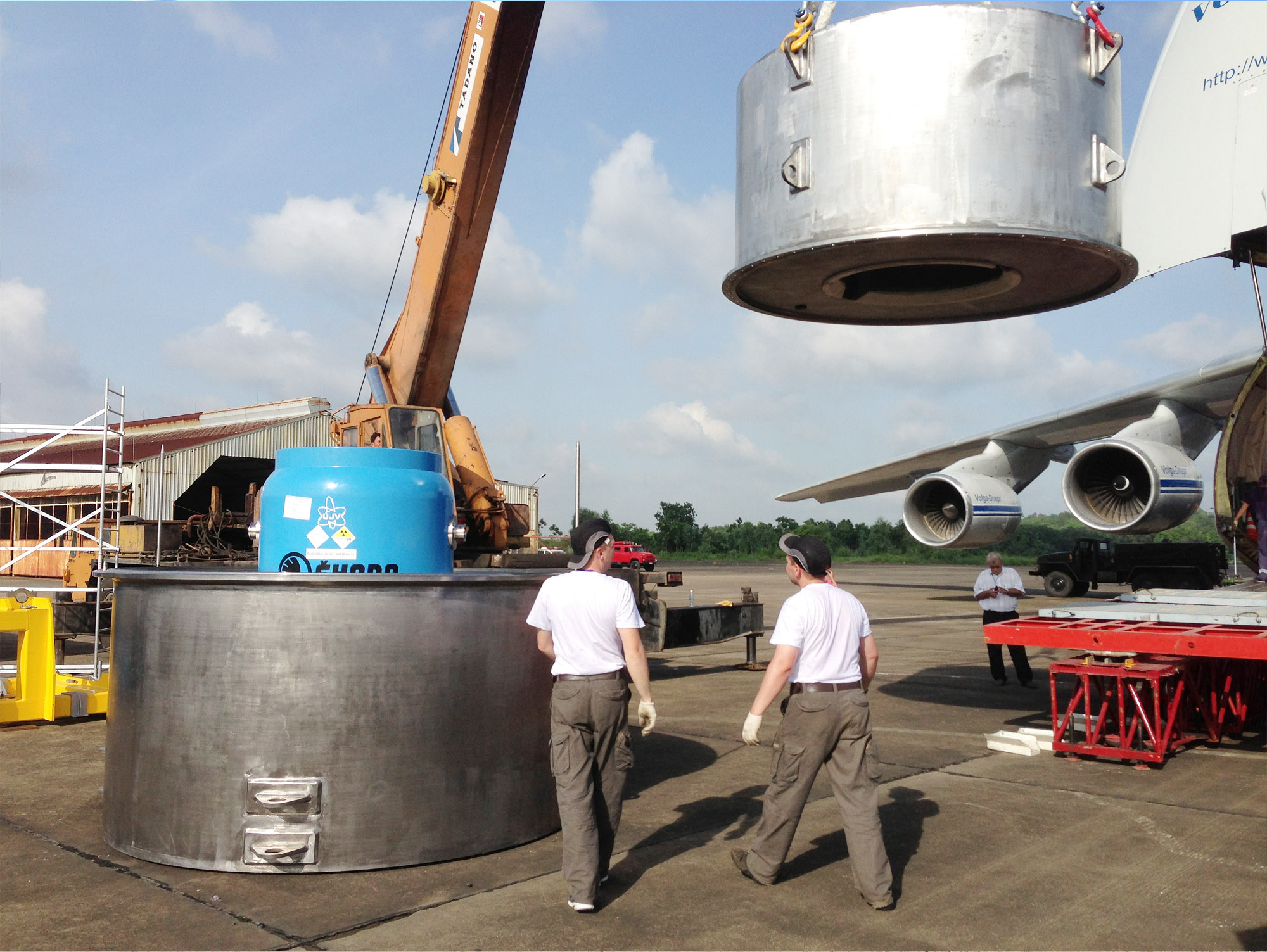 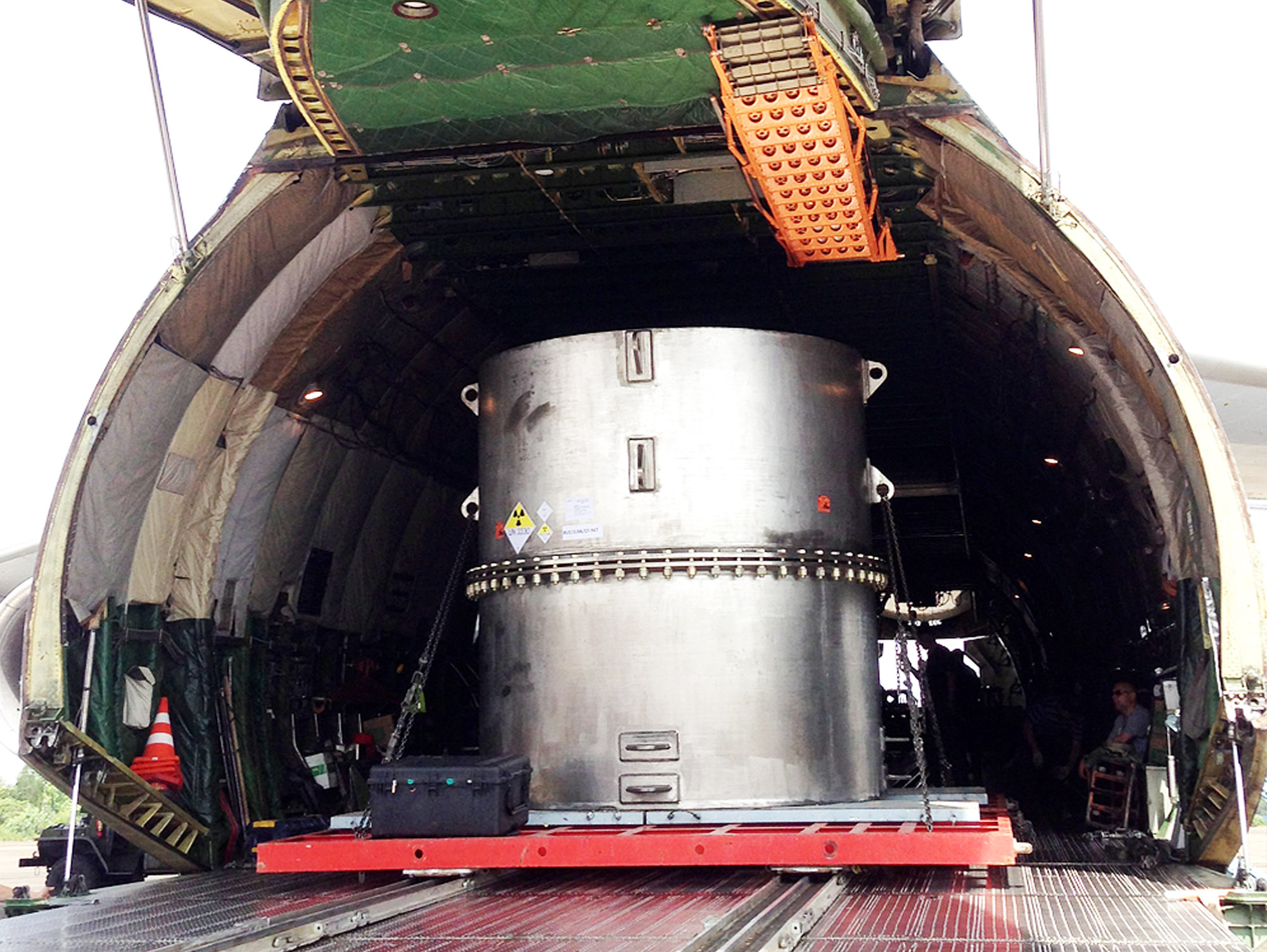