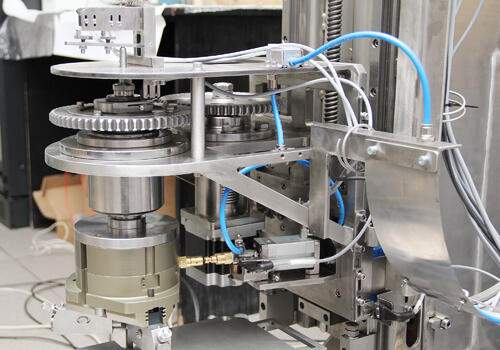 In 2014-2015, creation of a precision facility for profilometry and eddy-current testing of irradiated fuel rods to be used in a hot cell of RIAR State Scientific Center (SSC RIAR) was successfully completed. The scope of work included: preparation of the Terms of Reference, preliminary design and final design documents, development of the facility software, assembly, adjustment, tests and delivery of the facility to SSC RIAR, and training of the facility operators.

The facility is designed to examine cylindrical objects with the outer diameter 4-20 mm and up to 1.5 m long. The cross dimensions of the object under examination are determined by a contact method using two linear transducers with T-shaped probes. For profilometry of the objects with a non-cylindrical profile, the facility design allows changing the probes for spherical ones and adjusting the probe position relative to the object axis. Eddy-current testing is performed using plug-in eddy-current transducers of differential and absolute types. The facility has a modular design for a possibility to change its configuration for various research activities.

The main bearing element of the facility is a base plate with a load-and-turn well, a transport-operation module and a stage. A profilometry module and an eddy-current transducer are installed on the stage. An examined object is aligned with the profilometry module and eddy-current transducer by adjusting the position of the transport-operation module in the horizontal plane. The whole structure is rigid due to link rods that attach the facility to the hot cell walls. 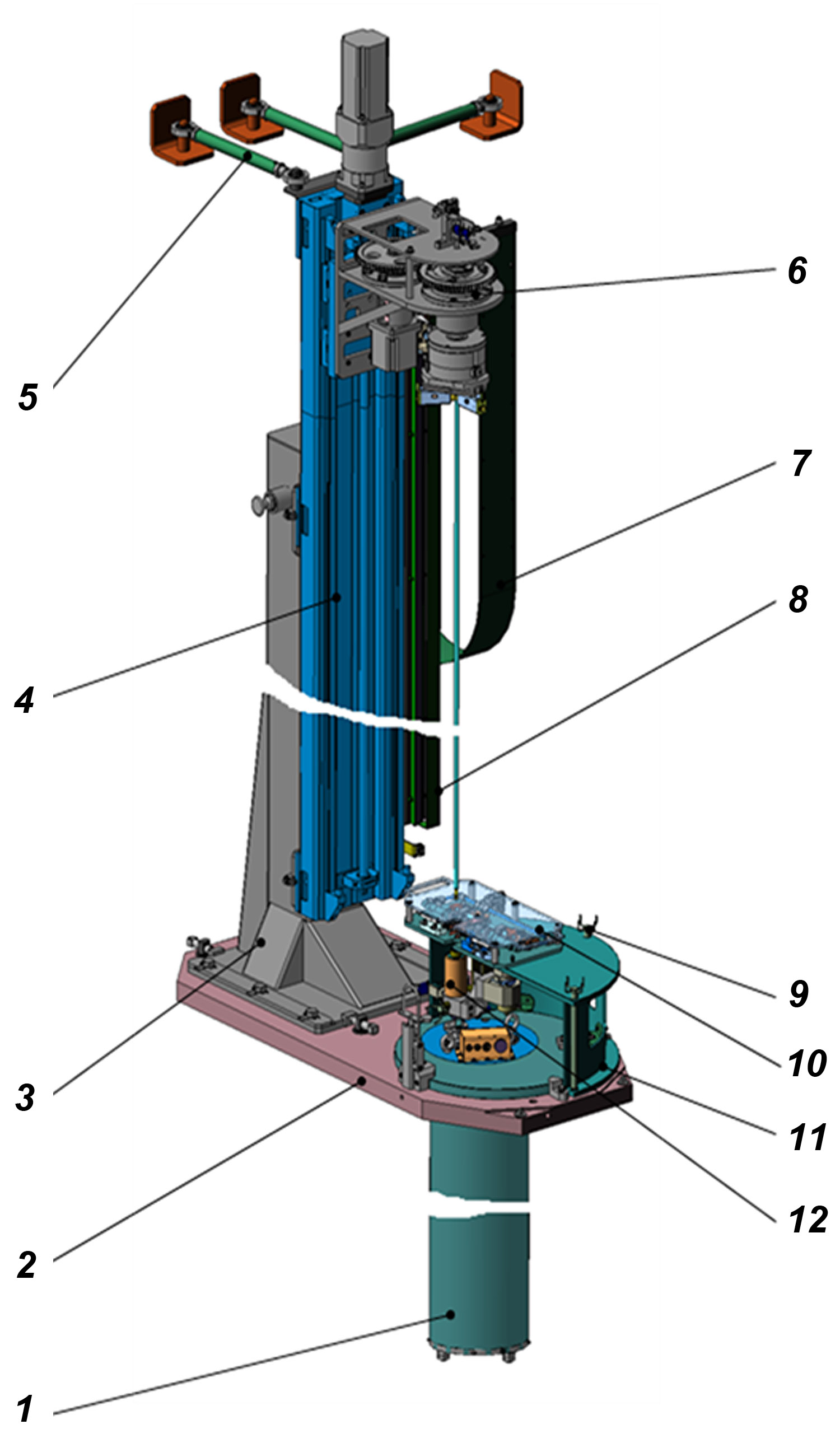 The runner block is mounted on a sliding adapter plate of the transport-operation module consisting of a ballscrew unit and a stepper motor. The design of the pneumatic grapple jaws allows unfixing the grapple and releasing the examined object with the manipulator of the shielded cell, if necessary. The grapple is equipped with a rotary drive based on a stepper motor that rotates the examined object relative to the linear transducers for profilometry in several orientations with the minimum pitch of 0.9 degrees.

In case of supplied power cut-off or failure of the stepper motors, all facility assemblies remain immobile. When power is off, the examined object can be removed from the facility with manual drives for vertical movement of the runner block and lift bottom of the charge-and-turn well. The manual drives are designed to be operated by standard manipulators of the hot cell.

The profilometry module is designed on the basis of two linear transducers and two pneumatic cylinders that drive the transducer probes away from the examined object during transport operations. In case compressed air supply is cut off, the transducer probes are driven away from the examined object. The error of the object cross dimension determination is not more than ±10 μm for 95 % probability.

Eddy-current nondestructive testing is performed by a pulsed eddy current device with a differential encircling, differential surface or an absolute encircling transducer. It is possible to create constant magnetic field with regulated intensity value in the examined object.

The information and control system is located in the control room and is designed as a control cabinet with a workstation, two monitors, an interruptible power supply and other indicators and controls.

To process the raw data obtained from the transducers the information and control system has a block of secondary converters that houses secondary facilitys of linear transducers, a load cell, a magnescale transducer, as well as a power facility to excite the coil of the eddy-current transducer. This block is connected to the work station via RS232 interface.

Eddy-current results are processed in the work station by:

The workstation provides the facility operation in manual and automatic modes controlled by the special software developed by the Sosny R&D Company. 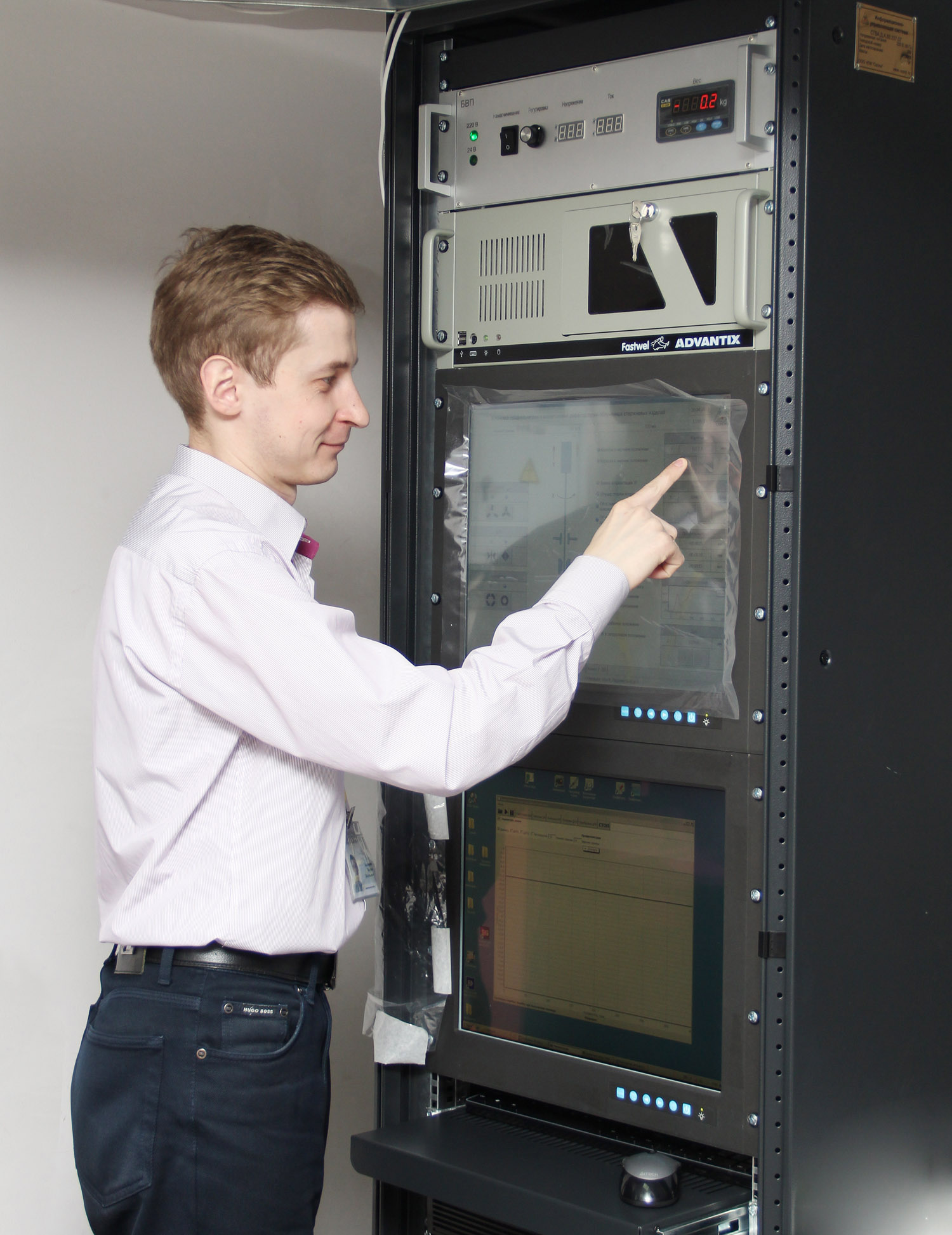 The software includes the following programs: 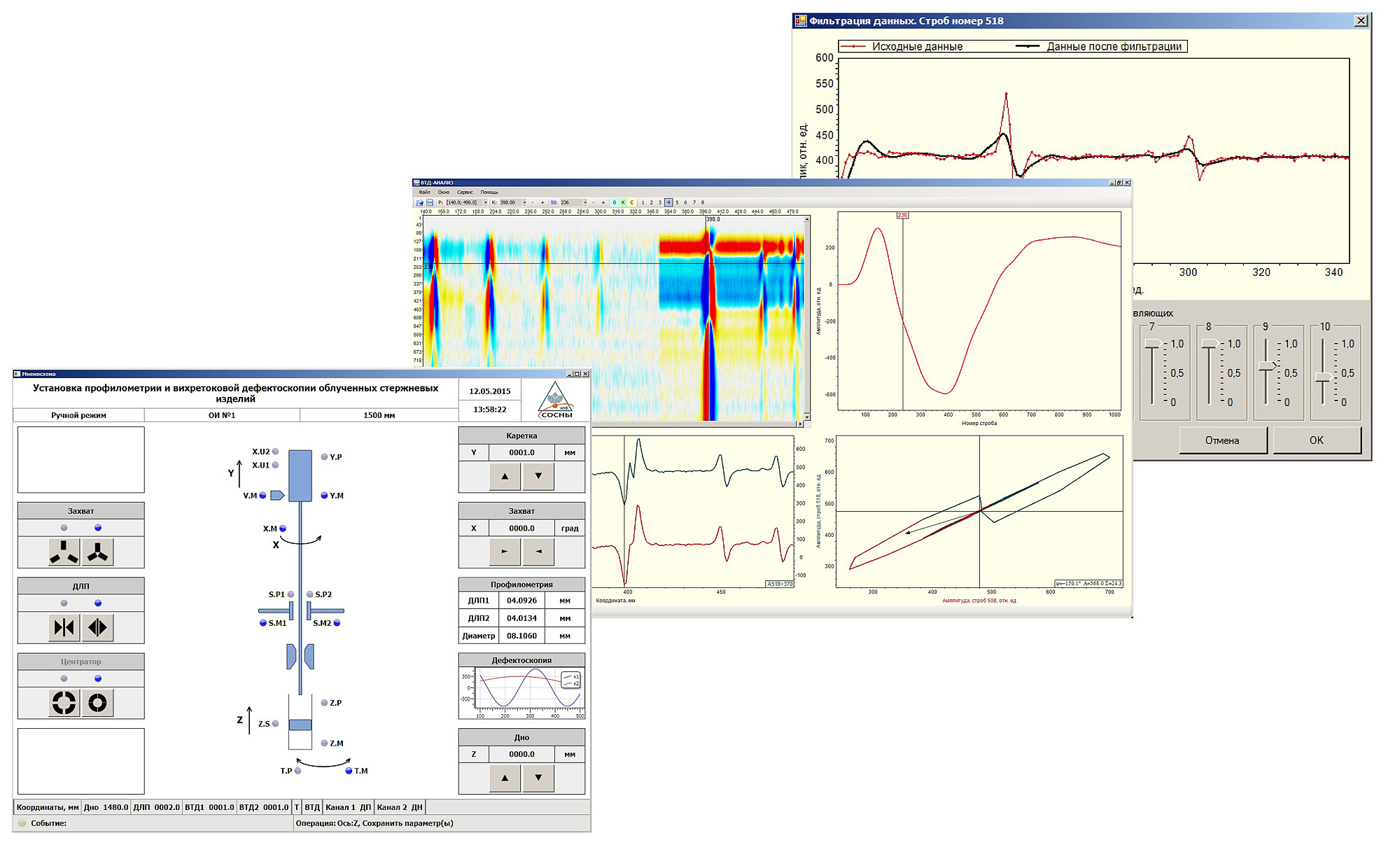 This work has resulted in creation of a new facility for non-destructive tests of irradiated fuel rods in the shielded cell. This state-of-the-art facility can be adapted for various research purposes. The facility design contains principal engineering solutions proven in operation of similar facilities. Considerable attention was paid to the reliability of the facility, its easy maintenance and operation. The tests witnessed by the representatives of SSC RIAR proved the efficiency of the introduced engineering solutions, good operability and high quality of the facility.