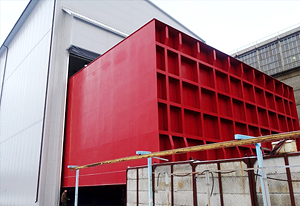 On 25 September 2019, the first batch of spent nuclear fuel assemblies from Lepse Floating Maintenance Base (Lepse FMB) was delivered to the Atomflot shed in Murmansk.

Hands-on activities at the Nerpa ship repair plant were started in May 2019, while the preparatory work had been performed since 2015. Sosny R&D Company fabricated a set of equipment for retrieval of the spent nuclear fuel form the Lepse FMB, storage of liquid radioactive waste, equipment and baskets for the spent fuel shipping, as well as life-support, process and emergency alarm equipment and systems. In 2018, Sosny specialists participated in installation, debugging and testing of the equipment and systems for the Lepse shelter, as well as in the acceptance tests of the spent fuel retrieval equipment. Jointly with the NRC Kurchatov Institute, Sosny organized training of the Atomflot and  Nerpa personnel to retrieve the Lepse spent fuel.

By order of ROSATOM State Atomic Energy Corporation, Aleksandr A. Samosnov, Anton N. Kostyuchernko, and Andrey V. Lachugin were given the Second Class Distinctions "For Contribution to Development of Nuclear Industry"  and Andrey A. Sychugov was awarded a ROSATOM Certificate of Merit to honor their great personal contribution to Lepse SNF retrieval campaign. The awards were granted on 27 September at the grand staff meeting dedicated to the Atomic Industry Worker's Day. Mr. Smekalin, Chairman of the Government of Ulyanovsk region attended the meeting and awarded the Governor's letters of appreciation to eight Sosny staff workers for merits in development of the nuclear industry in Ulyanovsk region, high professional level, great strides, and dedicated work. Honorary certificates were granted to 15 staff members who have made a tangible contribution to the Company's successful performance in 2019.