Another SNF Removal from IPPE 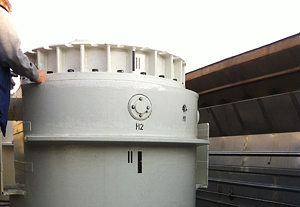 On August 9, 2017, another (the fifth) removal of SNF of the IPPE research reactors was completed at IPPE with the technical support provided by Sosny R&D Company. Four TUK-108/1 casks containing about 2 tons of SNF of the world's first NPP were shipped under a state contract between ROSATOM State Corporation and Mayak PA. The SNF was delivered to Mayak PA for reprocessing. The experts of Sosny R&D Company have taken part in every step of "nuclear legacy" removal from the IPPE storage facility since 2008, in particular, in preparation of the concepts and transport plans, safety analysis of SNF handling procedure, preparation of the infrastructure for TUK casks handling, motorway and railroad transportation of the casks, development of SNF encapsulation procedure, development, fabrication, delivery, installation and maintenance of the equipment and transport means, transportation and acceptance of the SNF for reprocessing. By now, more than 40% of the SNF storage facility has been cleared up (by mass of heavy atoms).