The Sosny Research and Development Company was set up in the city of Dimitrovgrad, Ulyanovsk region in 1992. In the first phase, one of the major tasks was to arrange shipments of spent nuclear assemblies (SFA), including leaky ones, from nuclear power plants to SSC RIAR for examinations. Setting up the Company was driven by the fact that the new state had established new regulatory requirements for SNF transportation and economic rules of business operation. Following successful resolution of that issue, the Sosny R&D Company participated actively in studies of various spent nuclear fuels. The Company succeeded in engaging many Russian and foreign companies and experts in studying the processes occurring in the fuel during operation. As a result of the joint work, by the early 2000s we had gained knowledge of behavior of light-water fuel rods under different operation conditions. Along with other achievements of nuclear enterprises led by the TVEL Fuel Company, this allowed for greater efficiency and safety of the Russian nuclear fuel resulting in a doubling of its burnup and service time, as well as the refusal of many countries operating Russian-origin reactors to procure the foreign fuel.

In the early 2000s, the Sosny R&D Company joined the International Program on Russian Research Reactor Fuel Return (RRRFR). A big scope of work was done to organize shipments and analyze their safety; technologies and equipment were developed for handling the non-irradiated and spent nuclear fuel. The first removal of non-irradiated spent fuel assemblies from Yugoslavia (now Serbia) took place in 2002. In subsequent years, our experts participated directly in the most of the RRRFR projects. They developed procedures and equipment for irradiated fuel loading into casks, trained facility personnel in handling the casks, prepared all necessary approvals including safety assessment documents. Under the RRRFR project, Sosny carried out various supporting tasks, such as sertification of foreign packagings in Russia, development of equipment for SNF loading into shipping casks and transportation, development of a Type C packaging for transportation of radioactive materials with no activity limits including aircraft.  By now virtually all highly enriched fuel has been removed from Russian-origin research reactors to a reprocessing plant in the Russian Federation. 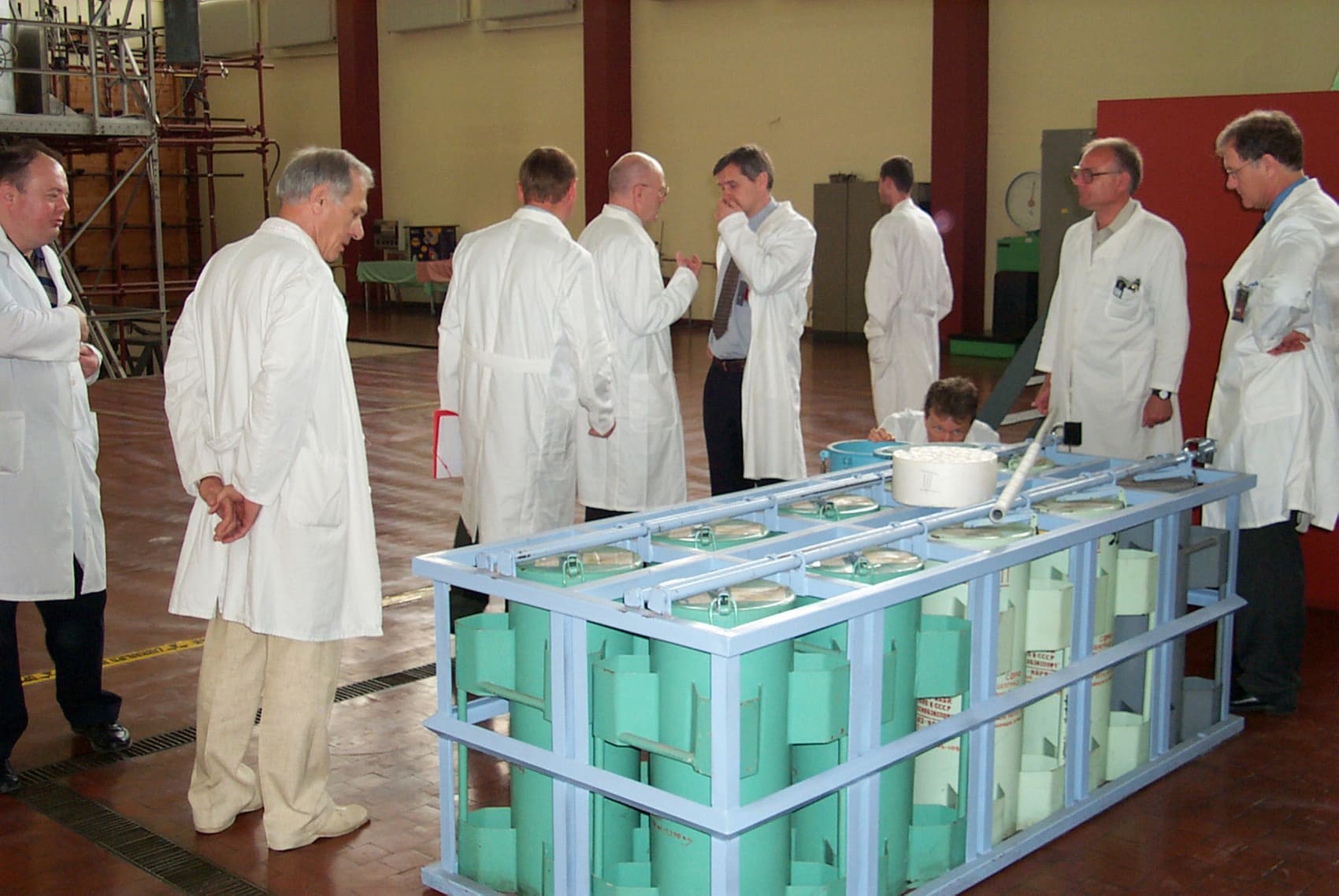 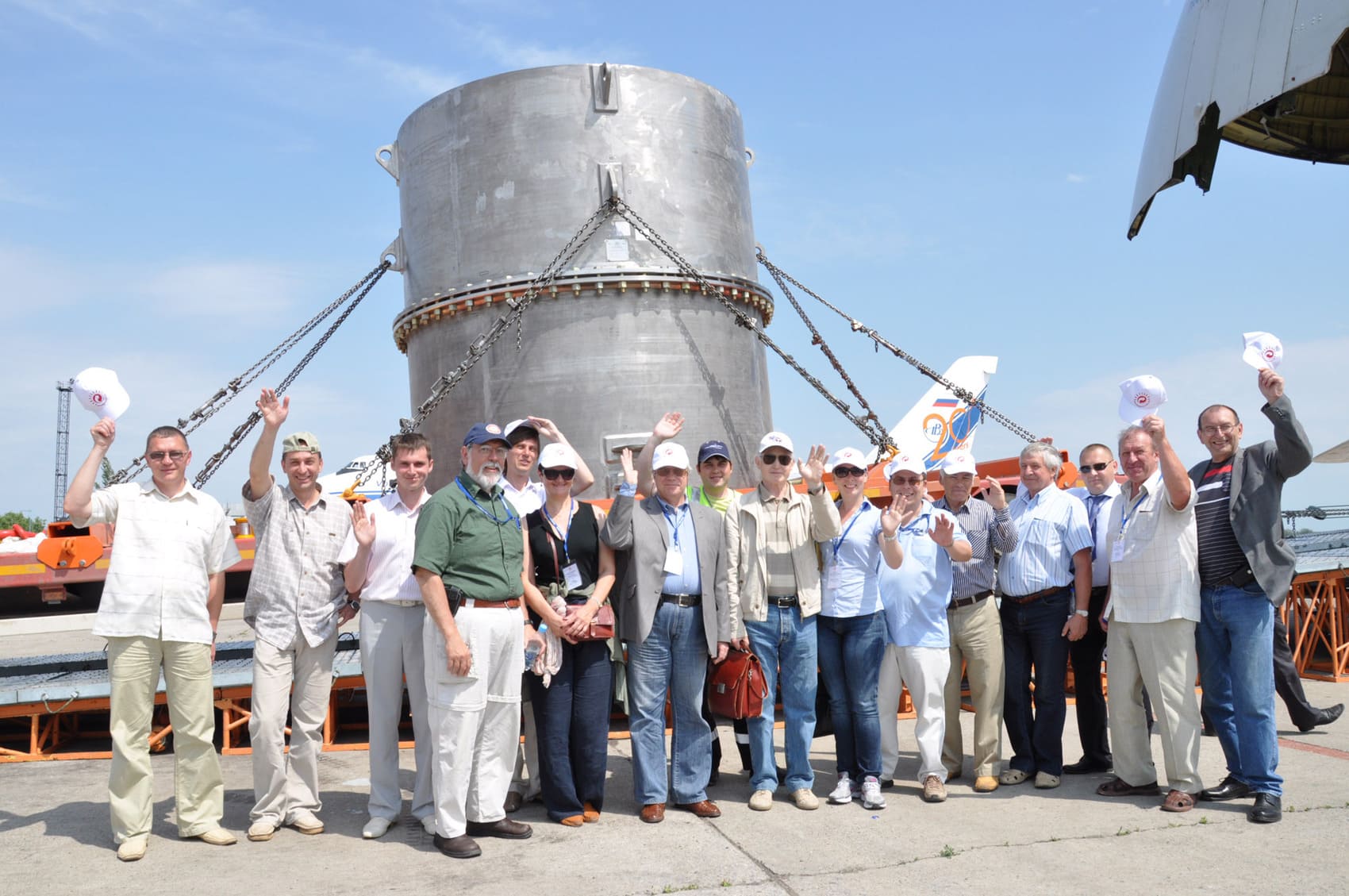 An important milestone in the Company's history was participation in elimination of the consequences of SFA failure at Paks NPP in April 2003. To address the problem, a team of leading enterprises of the nuclear industry, including the Sosny R&D Company, was set up and led by the TVEL Fuel Company. In a short time, a technology for handling the severely damaged SNF was developed and scientifically validated; unique equipment was developed and fabricated to implement the technology; personnel training was conducted; Hungarian licenses were obtained to develop and fabricate the equipment in Russia and to use it Hungary. As a result, in 2007 the first phase of activities was completed, i.e. the destructed fuel was collected in special canisters in the cooling pool at the Paks NPP, and in 2014 after an additional dry-out operation the SNF-containing canisters were delivered to the reprocessing facility at Mayak PA, Russia. Now, the Paks NPP buys only the Russian fuel and, largely owing to the emerged cooperation, is constructing two new VVER-1000 units. 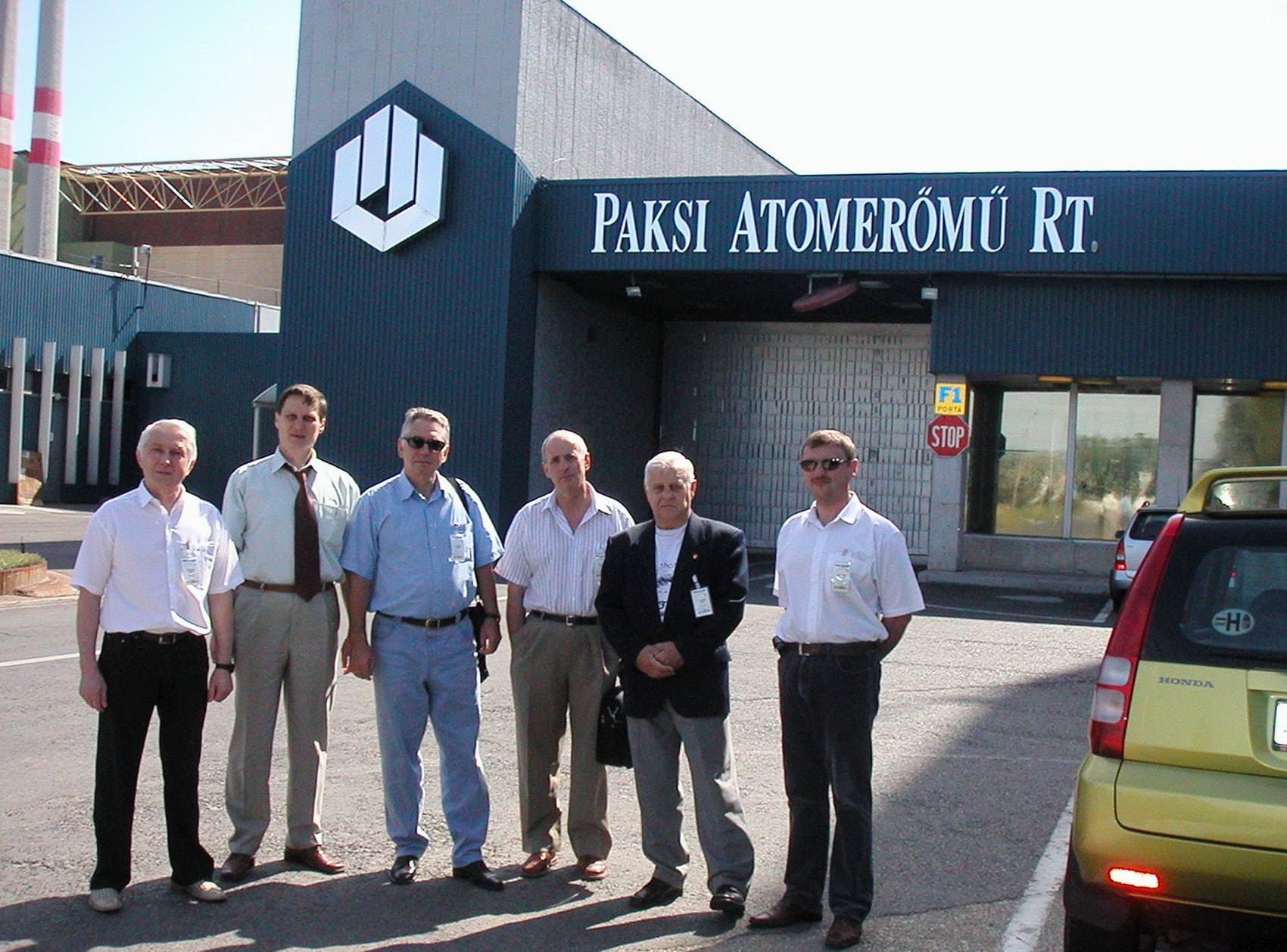 Since 2008, based on the experience gained, the Company has been participating in the Federal Targeted Programs (FTP) performing various SNF handling projects. In particular, technologies for preparation and removal of the spent fuel from the AMB reactor were developed; removal of the spent fuel from the storage facility at A. I. Leipunsky Institute for Physics and Power Engineering was started; a pilot project was launched to remove non-conforming RBMK‑1000 fuel assemblies from the Leningrad NPP; a technology for handling the SNF from the EGP-6 reactor at the Bilibino NPP was developed, etc. 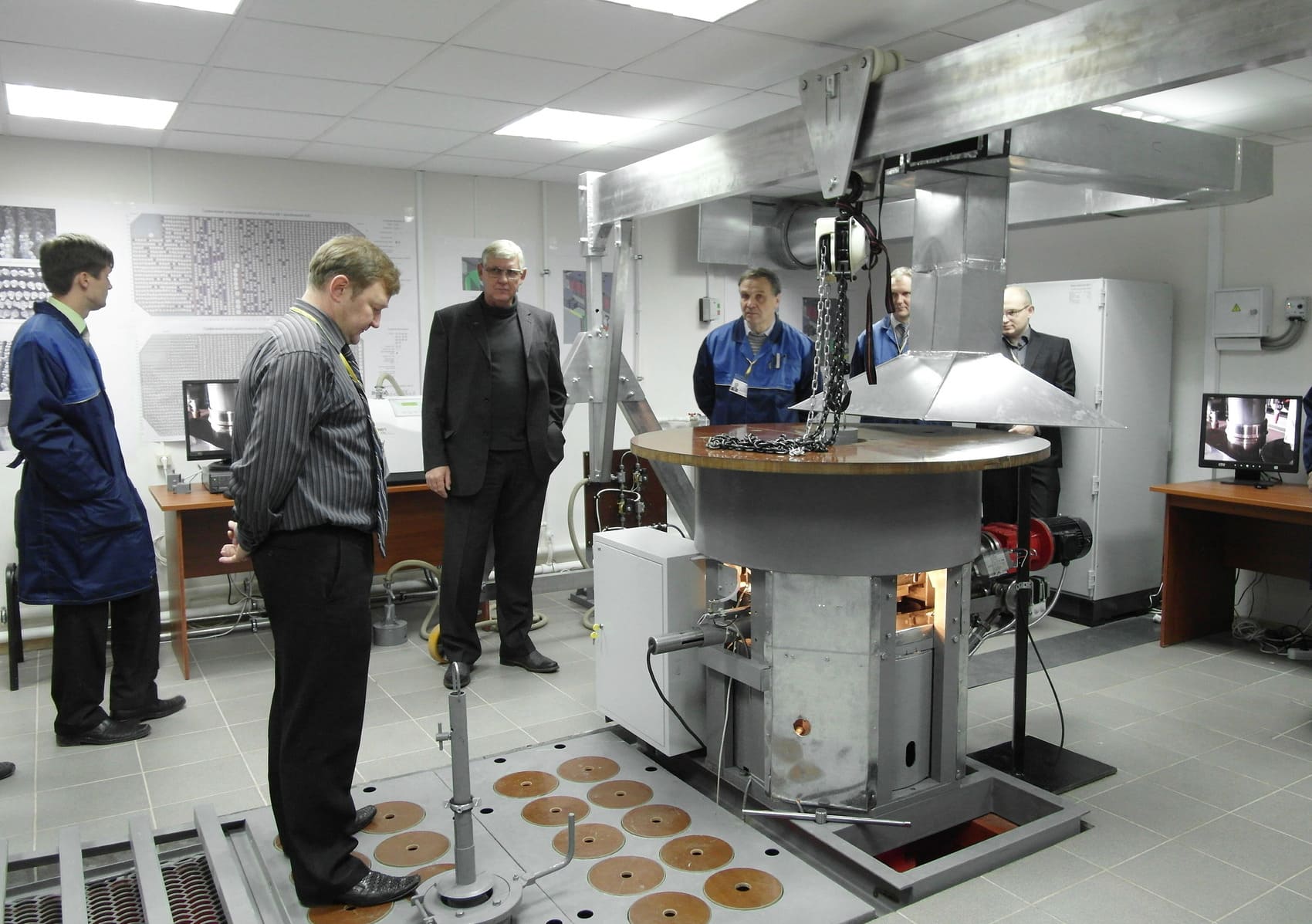 In 2009, the Sosny R&D Company in conjunction with OKB GIDROPRESS and other companies developed an FA inspection and repair bench for the NPP-2006 project. Under this project, Sosny together with ATOMMASHEKSPORT fabricated and installed six FA inspection and repair benches at the Novovoronezh NPP-2, the Leningrad NPP-2, and the Belarusian NPP, Belarus.

In 2011–2014, Sosny R&D Company along with other Russian and foreign enterprises participated in development of sub-critical assembly driven by a linear electron accelerator for the National Science Center "Kharkov Institute of Physics and Technology", Kharkov, Ukraine. Basic elements of the facility were fabricated and supplied, a part of a safety analysis was completed.

Since 2012, the Company has been actively participating in the Federal Targeted Program "Nuclear Power Technologies of the New Generation" to develop technologies for fast neutron reactors. For the first time in Russia, a large-size shielded cell with an inert atmosphere containing no more than 1ppm impurities was designed and fabricated for scientific research in support of pyrochemical reprocessing technologies for the mixed uranium-plutonium nitride (MUPN) nuclear fuel. Equipment with the parameters close to industrial ones  was developed and fabricated for handling liquid metals. Although the work is temporarily suspended, the Company has gained invaluable experience and expertise that are used today and will be used in the future.

Experience in the design and implementation of new types of equipment demonstrates that in order to be effective and competitive the Company needs a business model that would allow for conducting as many operations as possible on its own manpower. So, in 2014 the Sosny R&D Company constructed a pilot production facility (PPF) that is being continually expended and upgraded. Pre-conceptual studies and research are essential elements of the development of up-to-date high-tech equipment; for this purpose, a research and development department and a high-performance computer installation were set up. Thus, the year 2014 witnessed yet another landmark in the history of the Company. 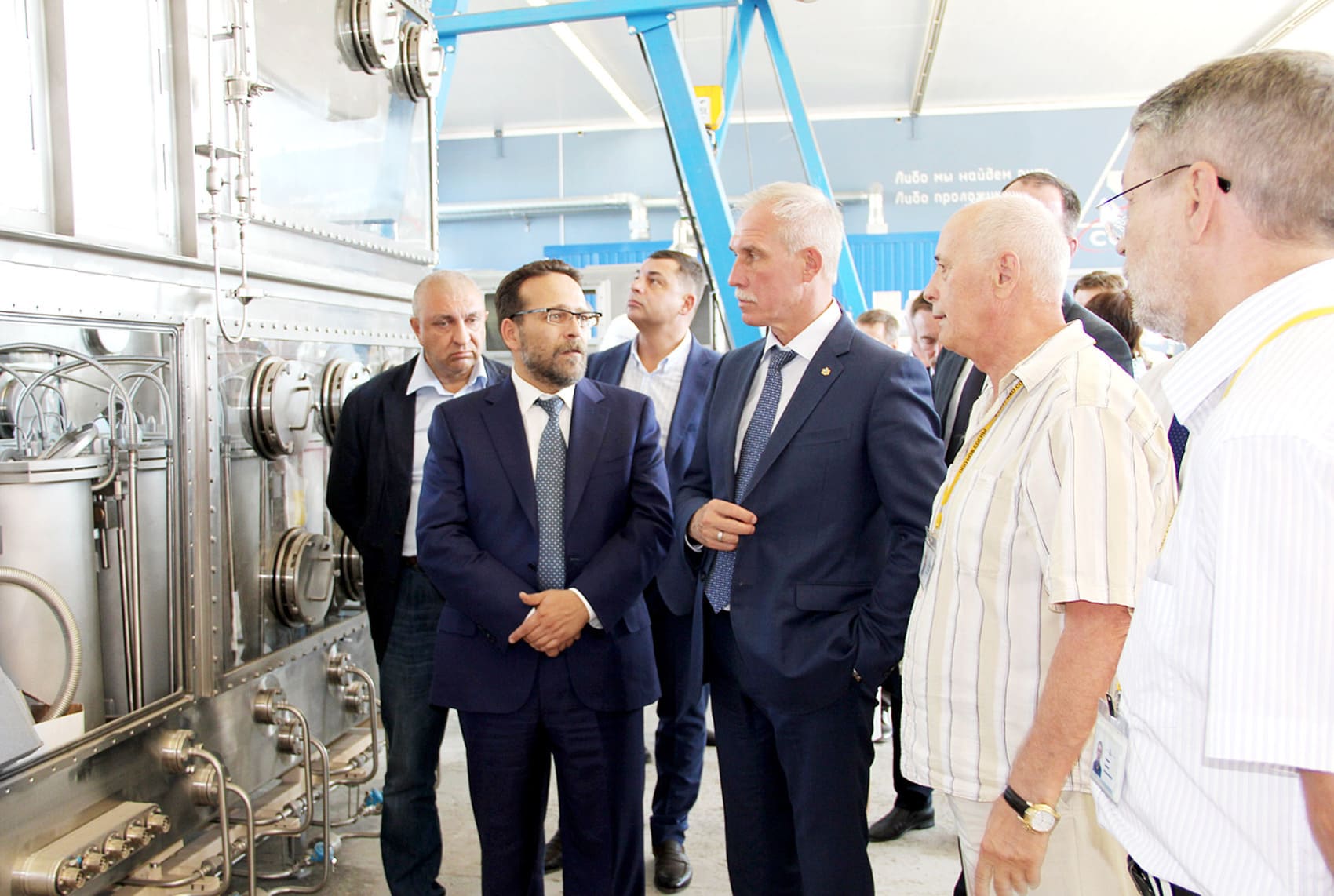 Raising to the qualitatively new level comprised developing equipment for the Pilot Demonstration Power Complex (PDPC) at the Siberian Group of Chemical Enterprises (SGChE), Seversk, Russia. In 2015, eighteen inert gas glove boxes were fabricated together with in-box equipment for the prototype facilities designed to try out the MUPN fuel production processes. In 2016–2017, the joint efforts of Sosny R&D Company and other enterprises was unique equipment for fabrication of the MUPN fuel for the PDPC Fabrication/Recycling Facility (FRF) including a facility for carbothermal synthesis of mixed uranium-plutonium nitride fuel, fuel discs and pellets pressing units, a pellet sintering facility, a fuel rod assembly line for the BREST-OD-300 reactor. The features of the FRF are a high degree of automation, remote maintenance, and an inert atmosphere inside the glove boxes. In the course of the work, the Company gained good experience in cooperating with foreign partners; the equipment was developed and fabricated in collaboration with French and Chinese enterprises. 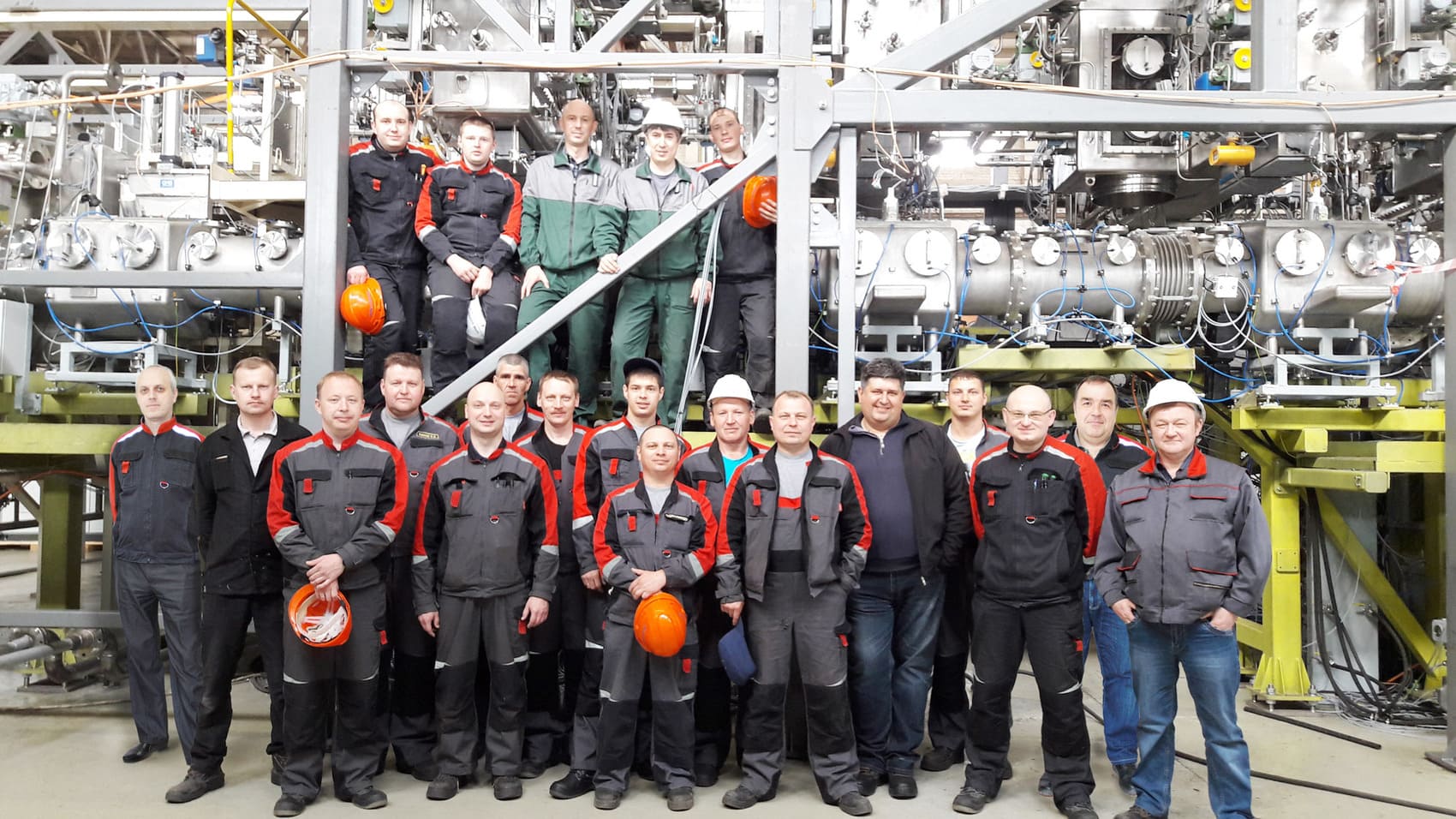 Since 2015, Sosny R&D Company has been actively engaged in development of the equipment for reprocessing the VVER-1000 spent fuel at the Experimental Demonstration Center (EDC) being constructed at the Mining and Chemical Combine, Zheleznogorsk, Russia. As part of the project, unique equipment including power manipulators for shielded cells is being developed, which have no analogue in Russia or elsewhere in the world. This work makes part of ROSATOM's strategic project. 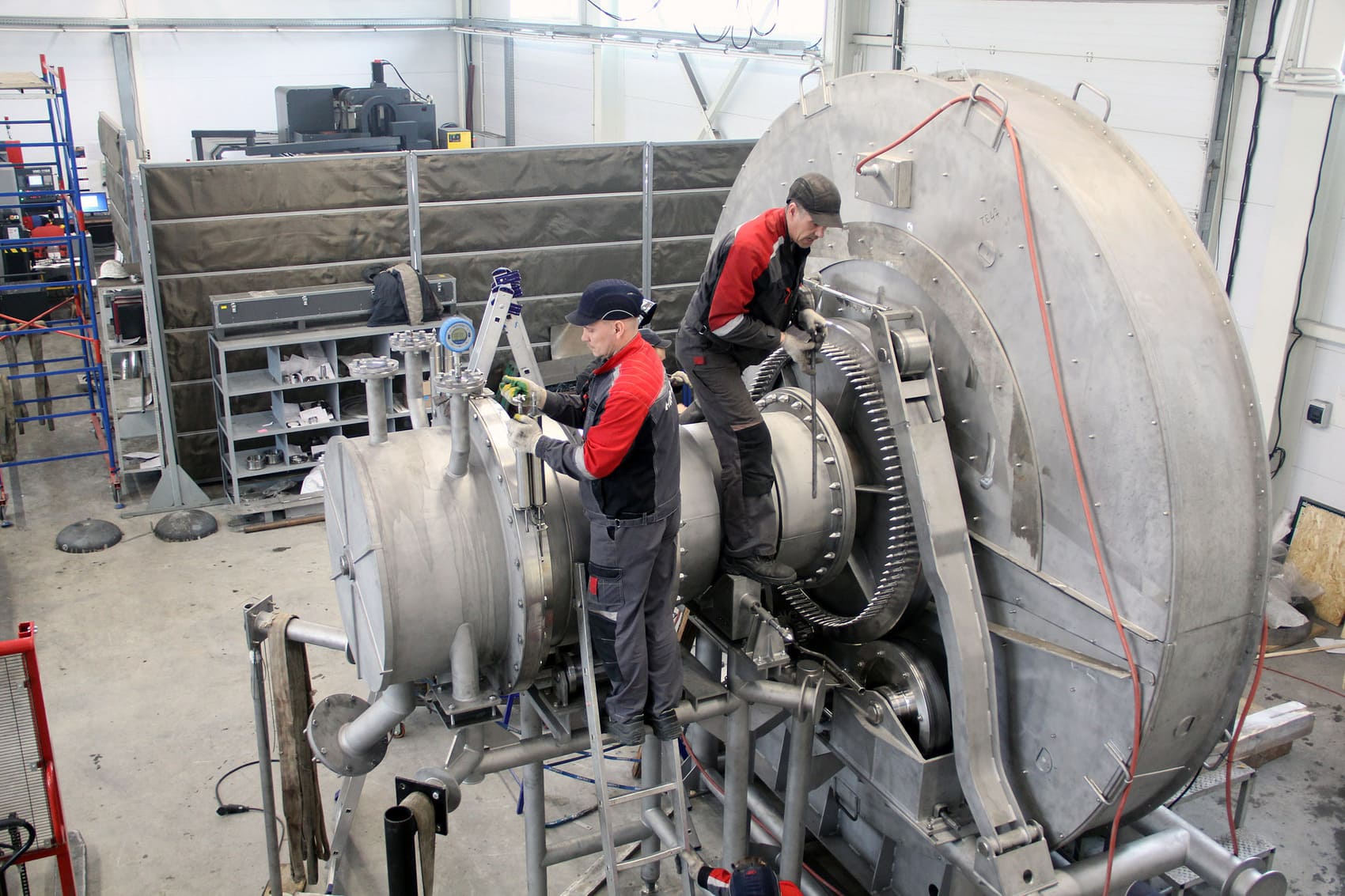 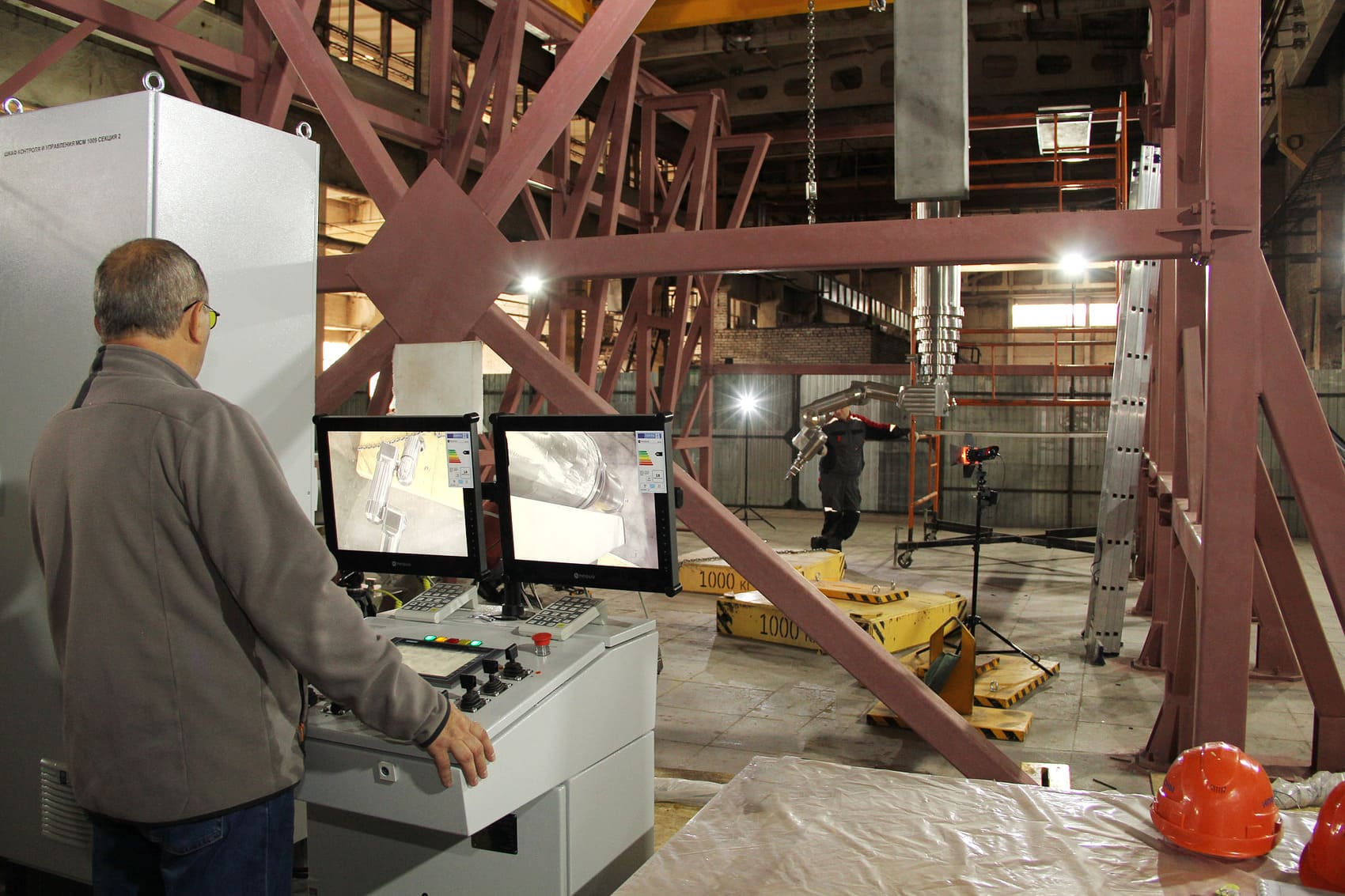 In recent years, the Company has been successfully exploring new types of activities, such as decommissioning of radiation hazardous facilities. In 2015-2019, an IAEA project was completed in cooperation with the Institute of Nuclear Physics, Academy of Sciences of the Republic of Uzbekistan to decommission the Radiation Technological Complex at FOTON JSC, Tashkent, Uzbekistan. As a results of the work, the site was cleared and reconverted for a further use in the national economy. 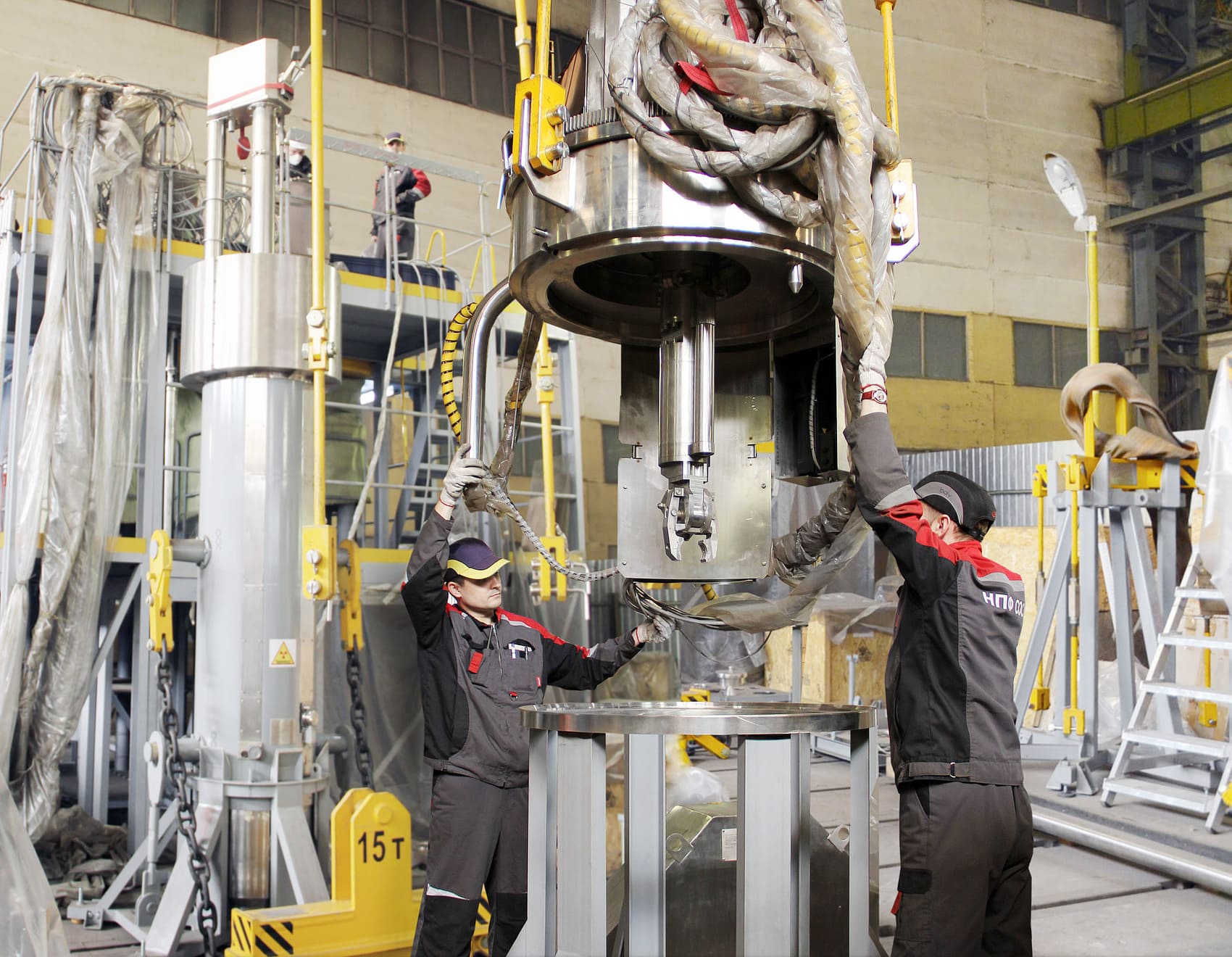 Throughout its history, the Sosny R&D Company has had to repeatedly prove its competences by completing challenging projects and offering more effective and safe solutions. So, we seek to pursue an integrated approach to the tasks and implement a complete production cycle, from development of technologies and detailed design to in-house fabrication of the equipment, its mounting on customers' sites, personnel training and further maintenance.

The Sosny R&D Company is a member of the Nuclear Innovation Cluster of Ulyanovsk region. The Company is highly committed to advanced training and postgraduate studies of its personnel, employs students of related universities as interns, and provides financial support for the city's child-care facilities.

The Sosny R&D Company has been a member of the Association of Organizations of the Construction Complex of the Nuclear Industry (ACCNI) since 2020.

In 2021, the Company joined the American Nuclear Society (ANS).

Our key customers and partners are the ROSATOM State Atomic Energy Corporation, ROSENERGOATOM, the Mining and Chemical Combine, the Siberian Group of Chemical Enterprises, the Federal Nuclear and Radiation Safety Center , the TVEL Fuel Company, National Research Center "Kurchatov Institute", the Bochvar High-Technology Scientific Research Institute for Inorganic Materials, the Khlopin Radium Institute, the Mayak Production Association, Institute for Physics and Power Engineering, the IAEA, the US DOE, ČEZ a. s., the Czech Republic, and other Russian and foreign enterprises.